I miss the randomness… 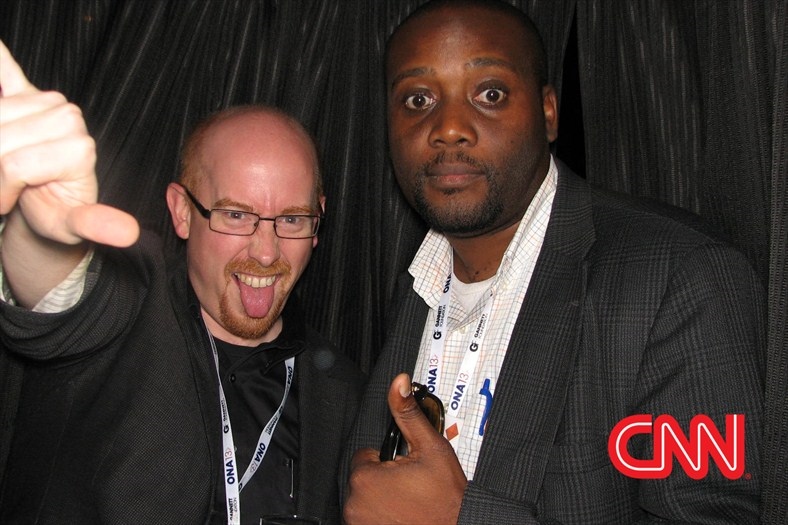 How do you choose to live?

I’m thinking my answer these last seven years would have to be “by the seat of my pants.” Otherwise, there’s no way you get this photo of yours truly and Kyle Whitmire in a photo booth at an online journalism conference after party in Atlanta hosted by CNN.

I wasn’t supposed to be in Atlanta for this year’s ONA conference; it was too much money and I wasn’t sure I’d get anything out of it. Plans to attend SXSW Eco and the first ever LION Publishers conference had been pushed to the site as well. Besides, the plan was to make a pilgrimage back to the Lowcountry and the Coastal Empire of southeastern Georgia for an ideas conference the following week. It’s been twenty years since I moved down south for what was supposed to be a five-year stint, so why not go back and use it as an excuse to take stock and think about what’s next?

Reminders from the #wjchat planning crew of my being the only member currently living in the southeastern US made me rethink my decision. One Greyhound ticket later I’m wondering the streets of downtown Atlanta seeing many of the people I only get to interact with digitally the rest of the year. It led a series of conversations I’m still in the process of having with folks about my current state of mind.

It seemed to work out well considering my trip to Savannah ended up being delayed indefinitely for reasons beyond my control. Five days hiding at the coast became an overnight jaunt up the road to Nashville and a few more helpful interactions (though it didn’t seem long enough).

There are like buttons clicked and “Hey, how are you?” inquiries directed at me, but most of my conversations of meaning are with those digitally distant. I fall asleep to the sounds of the Blis Blog audio file, or maybe an ASMR video courtesy of VeniVidiVulpes or Heather Feather after days pf my palms sweating while I have panic attacks attempting to complete the simplest of tasks. Weekday morning visits to Trattoria Centrale for a cup of coffee ensure I still interact with people on a regular basis, though it’s mostly through observation.

Some things are nice to realize while I’m figuring stuff out. I don’t fear missing out since the things I’m told would qualify for that aren’t what interest me. I’m supposing it’s what happens when you accept joining the kickline. It’s become easier to become annoyed by snark. I’ve gotten used to hearing folks tell me “That’ll never work” when I tell them of a plan only to either watch them do it themselves or support others as they do it. It’s become easier to sit by myself, though I’m not always happy with the thoughts that come to mind.

I realize I miss writing whatever comes to mind instead of worrying about what people think. They talk anyway and I’ve grown accustomed to interacting with facades without promise of a follow-up. It’s not exactly “waking up” to reality, just learning to accept it.

Reality can be much more fun than what we try to live most days anyway – like that photo of Kyle and I at a journalism conference. I’m not sure what will come of these revelations, but I do know I started this blog a while ago to meet new people.

Maybe it’s time to hang the shingle back out front and see what happens. It looks like those three words from January have been pretty helpful after all this year.