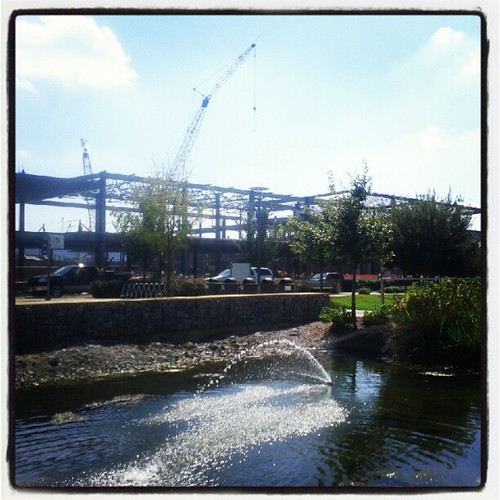 I’ve become a big fan of establishing frameworks to operate within in recent years. I find I do my best when they’re just broad enough to allow for some flexibility but specific enough to inspire action and encourage completion.

I’ve used several different methods and starting times over the last decade. The last few years have led to this process happening closer to my birthday in late August. It hasn’t been as motivating as needed though.

It’s led to my wanting to better demonstrate progress to myself.

Considering the number of recent changes in my life, I figured shifting back to the beginning of the calendar year would work for 2013. I also decided it was time to adopt a new method. I stumbled across Chris Brogan’s Three Words for 2013 and found my new approach.

Think of three words that sum up what you want to work actionably on changing/improving in the coming year. It works best when the words are positive in spirit and not negative.

It’s been tougher to boil down my hopes and dreams for 2013 into just three words than I thought. The result though is a clearer framework to every day progress than I’ve had in some time.

Reboot – Folks think of rebooting as the catch-all solution to performance problems with their electronic devices. I can’t tell you how many times I’ve  let my smartphone or laptop restart and problems seemed to fade away. It’s like starting with a clean slate; an opportunity to reconnect without all the baggage.

I’m a long-time fan of The Wallflowers (as evidenced here), so it’s no surprise I’d find a song they’d written that best captures the essence of why I chose this word.

The need to get back to basics has already led to my taking up old habits, whether it be taking a closer look at my tie collection (BTW – the first of those posts should hit next week) or getting back to daily routines like 45-minute walks and sitting meditation. There’s a lot of reviewing of notes from the last eight years of living in Alabama, organizing them into a realistic action plan, and then moving forward as if I’d never dealt with them before. So far, it’s working. Why sabotage success by worrying about what’s happened in the past anyway when it’s not helping you learn from the mistakes?

Process – I live in SEC football country – meaning when someone utters the word process during the fall, the name Nick Saban usually isn’t too far behind (if it hasn’t already been spoken). Sports Illustrated published a story last August looking at “The Process” and how it was permeating college football at an exponential rate. It’s rather funny when you realize the philosophy has introduced the idea of mindfulness to an unsuspecting public.

This life-long baseball fan has adopted a very football-focused mantra in recent months – advance the ball. It means accomplishing at least three things every day that help me achieve my long-term goals. It’s also been helpful early on to write about how my process works over on Urban Conversations (here’s the first post) while preparing for a couple of events this month here in town.

Produce – I’ve got a lot of crazy ideas floating around in my head. There are 68 posts saved as a draft on this site alone; we haven’t even gotten to the number of posts in similar states over on Urban Conversations or The Terminal. The number of ideas for slide decks are also insane. Some of the things I’d like to accomplish have nothing to do with writing, but they’d get a lot farther if I shared them with the rest of the digital world.

The plan is to know that I’ve posted at least once a day on a site. The more I advance the ball – the more I share progress on my process with others – the more I think will be accomplished. I may even get a chance to cross a few things off of the current version of Dre’s 101 in 1001…

At the end of the day, I’m focused on showing progress – about as quickly as what’s being done for the new home of the Birmingham Barons near Railroad Park as pictured above.

The simple part’s done now; the words have been shared. Now comes the execution – and hopefully some great support from what I hope is an expanded community in the coming year. What about you? What types of plans do you have for 2013? What are your 3 words?

2013 Seems to be a good year for change.  At least I hope so.  I need to give the 3 words idea some thought.  Depending on the words (and their focus) it could make things simpler or much more complicated.

I wonder though if "Reboot" is the right way to frame the idea of starting over with a clean-slate.  To me reboot means restarting with all the same old information, habits, etc.  That might be good if the starting point is good but if you reboot with bad habits maybe you don't make any progress.