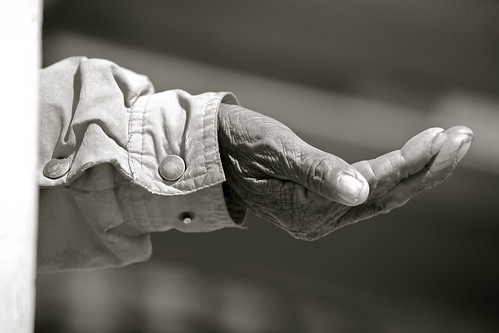 My friend Alice and I still fall into this habit where we’ll talk about “taking a step off” in hopes that we’d be comfortable afterwards about what was said or written and accept it because it had to be shared. This is one of those times…

About a month ago I stumbled across a tweet by Amber Naslund that led me to a post she’d put up earlier that evening.

As soon as I finished it I ended up adding this comment to the conversation.

It also ended up convincing me to change the talk I’d planned to give to my men’s prayer breakfast group the following morning to one that dealt with living with depression for several years, with a specific emphasis on the last eight months. I’m still not quite sure how it was received, but I needed to be open and share how I felt with someone (or a group of somebodies as the case would be). It’s made it easier to deal with – at least a little bit easier…

I’ve heard people talk about being in a room full of people but yet feeling incredibly alone. I kept wondering if that was supposed to be a given since that’s exactly how I’ve been feeling.

This virtual space (compared to the others that I’ve found hard to maintain recently) is supposed to be a place that lets me share some of what I was thinking (though never everything). I thought it would also be a way to break the ice with people that may want to talk about what I was writing about – hopefully a way to not feel so out of place after taking a leap of faith by taking a job that I thought would make a difference. I still haven’t quite found that group, though the virtual connections that I’ve made throughout the years have helped. I found a community that was willing to listen to me, even if they didn’t quite understand why I shared what I did and still do.

What I learned were some interesting life lessons.

I learned that words can hurt much more than people care to realize – and that most people are not always aware of their power. Those labels can and do sting and while I’ve been trying to live by Ruiz’ second agreement, it is a difficult adjustment.

I’ve learned what true friendship means and who some of those people are. I’ve realized what people may be willing to do for you even when you don’t want their help.  I’m sure that some will wonder why I didn’t say anything sooner. I joined several tribes in the process, learning that just jumping into a group doesn’t solve the issue of filling a void.

I’ve learned that it’s important to share, even when you aren’t sure if it will help anyone (even yourself). I’ve been reminded of the importance of living life (even when you don’t want to).

Amber challenged us towards the end of her post to stop being silent, to not be afraid of the labels that may be cast upon you because of sharing. The most difficult thing for me to do right now is share. It is why despite several attempts placing my fingers on the keyboard to write recently has been so difficult.

I’ve long wanted to find a way to explain why I enjoy and appreciate my friend (fellow SCAD alum and two-time National Slam Poetry champion) Anis Mojgani‘s poem, “Shake the Dust” as much as I do. I wanted to know if I could share how much the words to that piece have inspired me at times when I looked in a mirror and saw someone lost and buried deep in the midst of a dark cloud hanging overhead despite the sunshine around me.

I think I just found a way to do just that. Thanks, Anis. I think it’s time to shake it off of me now, though it will always be there.

That was beautiful, Andre. Thank you so much for sharing your perspective and for "Shake the Dust".

Thanks Andre -- I needed to hear this too.

Andre, bravo to you for sharing, and thank you for sharing Anis' awesome work. I'm also grateful that you've subtly drawn attention to To Write Love on Her Arms, an incredible movement to help find hope for people struggling with depression, suicide, addiction, and self-injury.

I am so touched and proud that you lent your voice to others. Keep doing so. You are heard, and you're cared for, even in the dark. Never doubt it.

As I was reading this, I found myself nodding in agreement over and over ... hitting a little close to home for me right now, I gotta say that I can relate. I am still "in the dark" myself, but I'll be sure to keep you in my prayers.