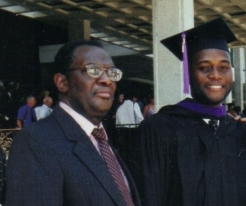 Today was Father’s Day in the United States, meaning that I made a phone call home to The Bronx to talk with my dad not knowing quite what to expect.

For many of the years that I spent in Birmingham on the third Sunday in June as a visitor on vacation (for the now defunct City Stages music festival), I was usually the last one to make his phone call home from Christopher’s phone. It was normally a quick call home where I spent more time talking to my mother than my father.

As my jobs in Savannah led me to finally get a cell phone, I still delayed making the phone call as we waited to head downtown from Highland Park.

I’ve long worried about what he thinks of me and my attempt at bootstrapping my way to happiness via blogging. I walked from my dream job in March 2007 (mainly due to frustration) with what I then thought was a somewhat secure safety net to help cushion the potential stress from things going wrong. Needless to say it’s never gone quite as planned. I’d always thought he’d get it since he’d done something similar when I was one, though I’m thinking he’d hoped it would have been different for me…

It’s nearly 3½ years later and I still get the question “How are the job prospects going?” whenever I call home. The other question that has finally started to appear in the last year is “How’s the website going?” I consider that a small victory as it’s at least acknowledged that I’m trying to venture out on a new path that I’ve long sought his approval on, despite knowing that my happiness was the more important goal.

I’m much more like my father than I ever thought I’d be. I hadn’t really thought about it much recently until I heard someone else talk about similarities between him and his father late last week.

You can replace a love of Calypso, steelpan and soccer with jazz, Hammond B-3 organs and baseball. Actually, I’d probably place all of the above as equal on my end as those who’ve attempted to follow my tweets and Facebook status updates during the World Cup may finally be realizing.

I remember making an emergency trip home after a week of certification training in Washington, DC. I remember the tone in my brother’s voice as he said, “you need to come home.” So I did, and I saw my father in bed just before we had to call the ambulance to take him to the hospital after refusing to go in for several days before my arrival.

I saw him laying in the hospital bed in the ICU and I thought about all of the questions I’d never asked about his life and that of his father. Apparently I’m a lot like Granddad as well with my love of working with wood but I don’t know much else.

Many of the questions still remain unanswered as shortly after he averted the reaper things returned to what they’d been before – walls of silence broken only once in a blue moon. I returned to Birmingham thinking about getting closer to home, going so far as to consider a job back up there shortly after the fact only to let it slip out of mind some time later.

The phone call came even later than I’d intended this year as my body decided that it wanted to take a nap, sparing me from watching what became an extremely sloppy Brazil vs. Ivory Coast match as well as a relatively short Yankees rain delay. The phone call was probably one of the longest ones that I’d had with him in some time. We talked about  how ridiculous the referees were being with handing out yellow and red cards and about the falling price of gasoline.

Many questions still remain unanswered and will probably remain that way for some time as I probably inherited my father’s stubbornness.

I do question what I’ll be like when I finally have the opportunity to be a father. I hope that I can make communicating just a little bit easier. Hopefully I’ll get a chance someday and maybe that child will get a better chance at helping me understand just where my father’s been…