Walking through the front door 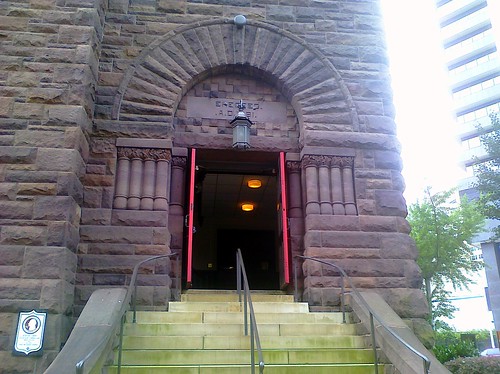 How often do you use the front door?

It’s a simple question that probably says more about us and our level of comfort than we realize. A regular routine of mine had me thinking about it yesterday…

Almost every Sunday morning that I’m in Birmingham, AL you’ll probably find me standing in front of the set of doors pictured off to your left between 10:30 and 11 a.m. They’re located on the 19th Street North side of First Church Birmingham, the city’s oldest United Methodist congregation (it’s also the city’s oldest church, period). It’s a pretty comfortable perch from which you can watch a Sunday in central Alabama just meander by. People are taking advantage of how quiet it is downtown and running into their offices while others are heading to other churches or activities…

The most peaceful part of my week takes place between 10:45 and ending promptly as the sounds of the organ fill the main sanctuary at 11 a.m. That’s when the bells from The Cathedral Church of the Advent and those in First Church’s bell tower join together for their weekly mini-concert – one that rings through the streets of the mostly quiet central business district.

It’s a sound that most of the members of the church don’t necessarily pay attention to.

Why? Most of them use the church’s courtyard entrance. 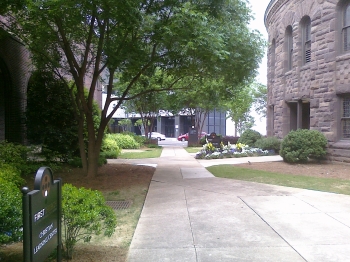 There are many reasons for this (and all of them are quite valid). The most obvious reason is because the church’s parking lot is located along 18th Street North and AT&T allows us to use their parking deck. Both options make it easier to enter the church from that direction. A renovation of the historic structure some years ago also placed its elevator and a new narthex at the back of the original building.

Those who’ve been attending the church for some time know all of these things, so it stands to reason that they will use the courtyard entrance. I’ve noticed that while someone visiting the church may park on 19th and come through those doors the first few times, after a while they will inevitably start using the courtyard entry. Life is going on behind those stained glass windows but for many driving by, until they saw the doors open with someone standing there, they didn’t know. Some members will still walk by the front door and make their way to the courtyard entrance.

While my example above involved a church, a similar situation exists in several communities nowadays. People enter homes from garages and side entries and rarely engage out front unless it’s for a special occasion. We also tend to look for back roads and shortcuts most days, avoiding opportunities to see what’s sitting out front and center around us in our community.

It’s tough for people to know what’s going on until someone makes you aware of it. Maybe we’ve become so accustomed to attempting to multi-task that we sometimes avoid opportunities to slow down – perhaps fearing that we’ll miss something.

That’s exactly what we’re doing though. We’re missing things that we maybe need to be paying more attention to – like bells ringing out on a quiet Sunday morning.

I’m just wondering what’s got to happen before we walk through the front door and pay attention?