Sundays at Church (Street) suggest a deeper look within 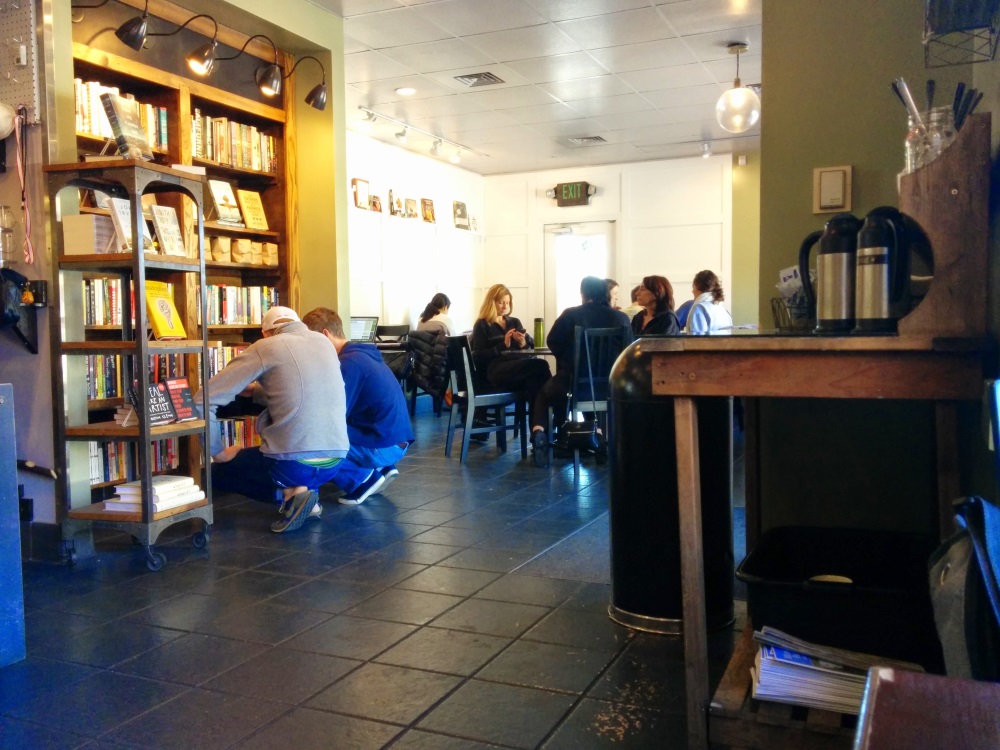 A selection from “Charlie Parker with Strings” played through on the ear buds as I started up the WBGO live stream on my phone and I sipped on my first cup of coffee. I was able to get a few minutes of conversation with Sri as traffic seems lighter than normal, but this morning was slightly more focused on reading through this week’s scheduled lectionary reading, tackling a mind map for the week, and taking stabs at reading longer pieces from The New York Times, the new JSTOR Daily website, and anything else that’s found its way into my Delicious stream via Twitter (complete with a lack of commentary about why it’s been added). Regulars seem to float in and out of the main space with choreographed precision.

My weekly rituals have become something more comparable to the accounts shared via The Times’s Sunday Routine series of late (this week’s profile of Amy Ryan is a fun one). I rise, avoid looking at anything digital for as long as humanly possible (save checking the weather to see what I should be wearing), and then knock out at least a yoga-based stretching routine. Coffee intake has been limited to what I can consume while sitting in the window seat at Church Street Coffee and Books in Mountain Brook’s Crestline Village after I’ve dropped Betsy off at First Church’s downtown campus to sing. After I return to pick her up, we’ll either make an attempt to grab a meal at Red Pearl (Chinese), Jason’s Deli, or something similar, or maybe we just eat something at the house. This leads into either extended yard work (there’s some leaf raking I should be tackling today) or occasionally making up a run from a regularly scheduled one during the week. During baseball season, these activities are accompanied by audio streams of games — any game — as it’s another opportunity to not think and just exist. The day wraps up with some more reading and some perusing of either PBS stations or Netflix (though recently bread making appears to be slipping in there too).

Most of the last twelve months have involved attempting to make sense of my week while sitting here and observing life around me. The longer I’ve been writing and observing, the more I’ve become a stickler for words. It recently came to mind how much I used to use the words, “I’m going to Sunday services” or “I’m going to Mass” (during those years in Catholic school). It’s probably why I can’t say, “I’m going to church.” Church has never been about a location to me, it’s more about a state of mind and community. It’s long been about tackling deep questions and not necessarily being comfortable with what ‘s discovered on the other side. It’s been tough to find community recently as I’m probably looking for something that’s not possible.

I became aware of something else though, something profound. It came to mind again yesterday when I got a chance to just stop by someone’s house and say hello for a few minutes. I noticed the community I sought was one willing to meet you where you are and not where they want you to be. It’s when they find you at the coffee house, or your own front porch and not one that needs to pigeon hole you into a specific location or narrative without questioning it whenever possible. It’s not about them as much as it’s about being. They’re the ones that don’t need the confines of a campus to define you, the ones willing to dig a little deeper. It’s less “We miss you” and more “When do you want to get together and catch up?” — and it’s amazing the difference in feelings depending on which one of those is used.

As this week’s lectionary readings suggests, to only lay problems at the feet of others without being willing to do for yourself makes no sense. It’s been nice to spend most of those twelve months tackling that challenge, though If it were that easy Sunday probably wouldn’t be as stratified a day of the week as it appears.

Hopefully, suggesting a look at how we approach this is needed preaches, or at least suggests we look a little deeper for others.