When should we reminisce about baseball legends? 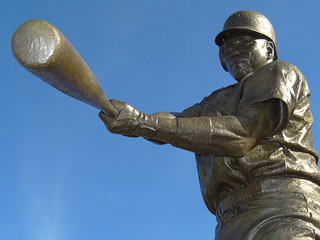 Last night’s MLB All Star Game was indeed a mid-summer classic. The offensive production and defensive exploits from both teams were what you’d hope to encounter whenever you go to a game to enjoy America’s pastime. (Freddie Freeman’s stretch, anyone?) The digital backlash after the game, however, reminded me of an issue with the power of saying whatever you want whenever you want – sometimes the context and bigger picture get lost in the noise.

Diehard fans of the game with Facebook and Twitter accounts took to their mobile devices to remind us that 15-time All-Star, the late Tony Gwynn, was not mentioned at all during the network broadcast on Fox. I was a little perturbed too, at first – Gwynn passed away a little less than a month ago. Then I decided to do a little digging because something else just didn’t feel right.

NOTE: Before going any further, it’s worth taking a moment to point out the significance of the outrage about the piece on Gwynn that was aired being done on Fox Sports 1 and not during the network broadcast. The MLB All Star Game is the only one of the four major exhibition games played in the United States that has never been broadcast on cable (for reference – via Wikipedia: NBA | NFL | NHL ). The NHL hasn’t played an All-Star Game in two seasons, and the Pro Bowl has been shown on network television for the last four, but both return to cable next season. It makes you wonder how loud the choruses yelling “FAIL” would still be doing so if the game had only been available to cable subscribers (i.e. potentially smaller audience)…

I figured out what it was when I looked over the names on this page (courtesy of Baseball Almanac). It’s when you also realize Don Zimmer (2-time All Star, 6-time World Series champion, NL manager of the year, 1989), Bob Welch (2-time All Star, 3-time World Series champion, Cy Young Award winner), and Jim Fregosi (6-time All Star) weren’t honored either that you recognize it’s not necessarily customary to honor players during the game unless their passing coincides with the week of the festivities itself. The first two names on that list passed away within twelve days of Gwynn (with Fregosi passing away in February).  It’s something being looked at in more depth in the time since I’ve been researching and composing this by several websites, including Awful Announcing, SB Nation, and Deadspin (the last one making a plea similar to the one I’m suggesting down below).

Before folks tell me I’m nuts, let’s not forget that 24-time All Star, 3-time World Series champion, and St. Louis Cardinals great Stan “The Man” Musial didn’t get mentioned during last year’s festivities; he’d passed away that January. By the way, Ralph Kiner wasn’t mentioned this year either (he passed away this February).

Only honoring those greats who pass away just before the game during it appears to be a long-standing wrong that many want to see made right (if the online comments making the rounds are any indication). Some, like Yahoo! Sports, pointed to the scrambles made to honor Ted Williams and George Steinbrenner, though those deaths happened days (and not weeks) before the game. It still becomes an issue of how such a remembrance is done. Is it only the greats we take time to remember, or is it anyone who’s ever donned a uniform? The list I referenced above indicates it’d be a pretty big one most years, but the recognition would be something those families would cherish and remember for a long time.

If MLB and Fox failed us last night, they’ve been failing for a while, as we have as baseball fans if we truly want to honor those who’ve passed in a meaningful way on a national stage. Perhaps this digital outrage may lead to a remedy? Maybe…