Watching the 2013 Inauguration from home 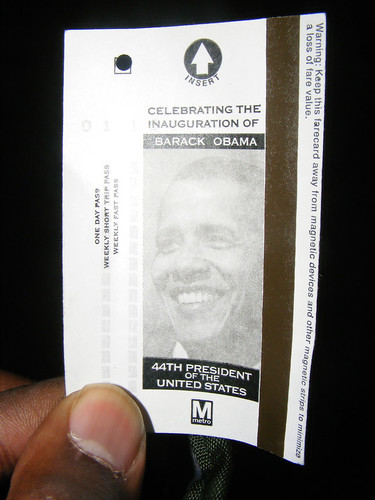 I didn’t go to Washington this time, but it was still a powerful day in front of my television set.

I probably know the Red Line of the District of Columbia’s Metro system as well, if not better than, the portion of the “4” line running from Woodlawn in The Bronx to Borough Hall in Brooklyn. I’m also known to be comfortable walking from Union Station over to DuPont Circle, even if the temperature is 20° and there’s snow on the ground.

See, I found myself in Washington for at least one week, normally in January, for each of the first five years I’ve lived here. It normally involved taking classes at National Trust for Historic Preservation headquarters.My friends Scott and Heather would check with me around Thanksgiving to confirm the dates.

This was my annual “trip” before it took its current form, and it was always enjoyable and full of surprises.

The routine was maintained for a while and all was well; there’s even that time I met Mayor Daley because my classes normally coincided with the annual winter gathering of the U.S. Conference of Mayors (preparing to hold their next gathering here in Birmingham this fall). The trips finally slowed down, but not without making one last scheduled pilgrimage in 2009 so I could witness the swearing-in of the first African-American president in person. Considering I could stay with friends who’d be going through their fourth such experience while living in D.C., it seemed like a no-brainer.

The days before Inauguration was filled with chance encounters with the then President-elect and his motorcade, including realizing he’d chosen to do his volunteer activity for his Day of Service on Maryland Avenue, about  two blocks from my friends’ home. There was also an opportunity to see what in my mind is still one of the best collections of art from a political campaign season ever. There was also a chance to catch up with another dear friend I don’t get to see or talk to often enough. He was wrapping up spending the previous eight years serving as a photographer assigned to cover Vice President Cheney’s wife.

The morning of the main event was an exercise in perseverance as we navigated a seemingly endless sea of humanity at the Mall. We were also navigating the crowd with their four-year old daughter (gaining us some sympathy, but fewer options in terms of where to go). We did end up getting separated – somewhere around the Washington Monument.  We’d watched the We Are One concert from that area the previous day, so the screens were still up. I figured it was a good a place to camp out and watch as anywhere. It turned out to be the right place for me. 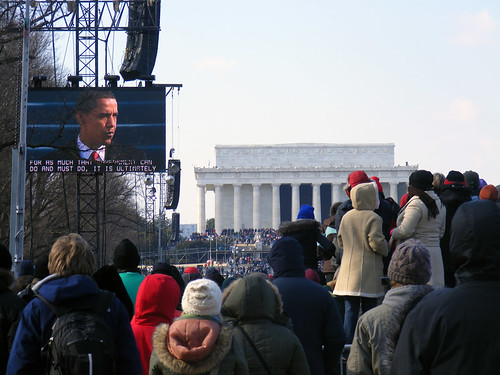 There was something powerful about watching Justice Roberts administer the oath of office to President Obama via a video screen in front of the Lincoln Memorial. The same could be said of watching his first Inaugural address from that vantage point (pictured to your right). The strange thing is, I watched. There was a sea of humanity that wanted nothing more than to be able to say “they were there,” and I was right there with them.

I’d long questioned the lengths to which fans of football teams in the SEC would make sure they were in the same state as their team for the big game – then I experienced the Inauguration. There are several folks I’ve met in recent years who get jealous when I say I went just because I could. I still haven’t ever really debriefed from that experience, but it’s one I’d like to try again in the future. It’s probably also finally time to finish uploading the rest of my photos from that trip.

This year I lived the campaign vicariously through watching friends I’d made through my journey into the world of digital communication like Chirag Patel (who launched this last year) and Daniel Ryan as they got stuff done at Obama headquarters in Chicago. Instead of scoring posters from outpost campaign headquarters in Colorado during the campaign, I kept track of what was going on via my Tweetdeck columns. I honestly didn’t quite know how to participate as I drove home in 2009. I’ve got a better idea of what I’m capable of – not just in 2013, but beyond.

As I watched from home with my second screen in front of me, it hit me just how much things had changed. I’d taken my photos using a DSLR and then found a place to upload them to Flickr, most notably a meetup at SoVa after the bulk of the festivities were over. Now, a mashup courtesy of Chris Amico and a much larger collection of smartphones in attendance meant a real-time map of Instagram posts was simply par for the course. Most notably, the words spoken in 2009 were more perfunctory to me. This time, without having to worry about how cold I felt or how long the walk to the coffee house would be, I got  a chance to actually listen.

We, the People, were in fact challenged today – regardless of party and despite the voices of the pundits across your digital spectrum. What needs to be determined now is if we were listening this time and, if we were, how do we respond?

It’ll be an interesting story to watch unfold. Maybe it’ll even be more fun if we can ignore the horse race coverage of politics until absolutely necessary…

We can be hopeful, indeed.