The influence of a legend 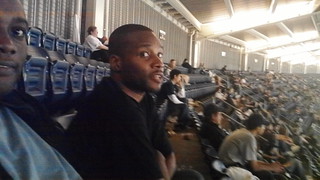 I don’t get home to New York that often. I can count on my hands the number of New York Yankees ballgames I’ve seen since 1996 (maybe even just on one). Add to that the number of times my brother and I can actually remember going to a Yankees game together (the answer to that question would be none), and you figured something had to give back in September of last year.

That’s when I visited New Yankee Stadium for the first time and finally attended a game with Ainsley (as this little bit of photographic evidence above proves). It wasn’t just any game either; it was Yankees vs. Red Sox. At home. The last home game of the season. Incidentally, it’d been 5 years since my last Yankees game – at home on the last Sunday of the season against the Red Sox.

Derek Jeter didn’t play (he’d already played nine earlier that day thanks to a rain out back on Friday), but we did have pretty good seats. We ended up seeing what felt like two games – mainly because you don’t see 2 ½ hour games when these two franchises get together, but 5+ hour marathons.

The score was tied going into the top of the ninth and most of us in the grandstand hadn’t been paying attention to the bullpen. When the first notes of “Enter Sandman” started to play, I did what any diehard Yankees fan would; I rose to my feet and welcomed in the guy who’s probably going down as the greatest closer of all time.

I then proceeded to watch Mariano Rivera pitch the ninth. He held them scoreless (though the Yanks did lose the game a few innings later, allowing me to see Jonathan Papelbon make one of his last appearances for the Red Sox).

I was wondering why we seemed to be just a little bit louder than usual. That’s when it hit us. It seems we’d stumbled into seeing Rivera’s first appearance since setting the all-time saves record four days earlier.  It was the opportunity to be a part of a slightly louder standing ovation from those in attendance thanking him for what he’s meant to Yankees fans all these years. I’d been reminded recently of how we Yankees fans are a guarded bunch when it comes to how we treat the guys who don the pinstripes compared to other athletes who decide playing in The Big Apple is something they can handle.

Merely a bump in the road

There are very few fans who would have been upset if “Mo” decided to announce his retirement after learning about the severity of his ACL injury. Instead, we were reminded of another reason we stand and cheer for him:

We’re known as a tough bunch, us New Yorkers. We don’t like to quit too often. Thankfully we seem to find ways to attract people to the city that don’t mind adopting that mindset. It’s nice to have them around when one’s thinking about abandoning it when it’s needed most. The same tenacity and focus that’s guaranteed him a first-round election to Cooperstown is giving some of us a lesson in recognizing how and why that focus and determination helps.

Perhaps he’ll come back this year during the postseason. Maybe he’ll run out from the bullpen in right-center field early in the 2013 season, throw one pitch, and then call it a career. He’s already embodies Joe D’s famous quote quite well – and reminds us of how to tackle those bumps in the road gracefully.