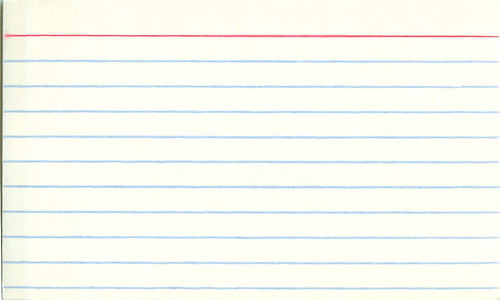 “Take out an index card.”

Those five words caused a great deal of stress and dread among students in history classes at Mount St. Michael Academy in the 1990s, including a few audible groans from me. They’re also the main reason why I don’t like walking into a meeting nowadays without having done my homework first.

You never walked into James Doris’ classroom without doing your homework – unless you were prepared to suffer the consequences. Those came in the form of pop quizzes taken on 3”x5” index cards. They became more frequent if he thought his class wasn’t taking the assignments seriously. I still remember taking three of them in the course of one class period. If you didn’t have the right kind of index card, points could be deducted. The aversion to studying via index card is something I haven’t exactly been able to shake all these years later (thank goodness for PowerPoint).

I haven’t even gotten to my love of crosswords (including attempting to launch a weekly one here in town soon); my ability to amaze people because I can type faster than most think I should; or my continuing love of literature and the South.

Why am I even bringing this up?

It’s an example of a life lesson you don’t have the ability to recognize and appreciate until years later.

Next year will be twenty years since I finished high school. I normally bring that up around people who’ve been to their 30th or 40th class reunion and they tell me to stop complaining. The funny thing is I haven’t been able to fully share what’s going through my mind most of the time.

Next weekend there will be at least 1,000 freshly minted graduates of my collegiate Alma mater enjoying the end of one journey (one I still say is among the best of my life – regardless of the bumps and bruises along the way) and the beginning of another one. There are millions more also making that leap into what society calls adulthood across the country. I’ve tried for years to craft a post offering some form of wisdom to them and others crazy enough to stumble across this site. This is the first attempt at one of those posts (you may see the other one by Saturday).

We always seem to tell graduates to not waste the opportunity before them. They are never to stop dreaming because they are our future. We suggest that they it will be extremely tough but that perseverance will pay off. We tell them that they should be thankful for the opportunities that will be laid in front of them. I wouldn’t even mind seeing someone deliver one in Savannah one year focused on “Ac-Cent-Tchu-Ating the Positive parts of your future.”

I’d like to focus on an extremely valuable piece of advice these future leaders should take to heart:

Don’t forget to say “thank you.”

We seem more focused on doing that when society’s told us it’s appropriate – while sitting at a table staring at a turkey in late November. I can’t think of when it would be more appropriate in our ritualistic world than when we embark on the symbolic passage into adulthood on a hot Saturday morning in late Spring wearing dark-colored robes.

I took some comfort in finding this tidbit of information on the Hallmark Cards website:

Increasingly, graduates give thank-you cards and gifts to parents and teachers to express appreciation for guidance and support during their years of education.

One would be hard pressed not to find cards congratulating bright-eyed, highly ambitious high school and college graduates on their accomplishments dominating the shelves at discount stores and populating ecard search results online. At the end of the day you, the graduates, are the ones who sat through the classes and dedicated yourselves to improvement. What of those who’ve helped you along the way? There’s a great deal of talk about the emergence of the “thank you” economy. It’s been nagging at me recently that we don’t ever get encouraged to say thanks to everyone who’s supported you along the way – not just those with whom we’re going to be doing business.

It is not easy to remember something like “thanks” in the middle of family swarming to take that perfect photo of you they can share with the relatives on Facebook to prove school’s over. Family and friends are focused on other words and phrases as you’re turning that tassle. “Congratulations” is one used often; “I’m proud of you” is another one. It’s probably something they aren’t expecting, nor should they as it’s supposed to be your big day.

I’ve been accused of not saying thank you enough and of not showing gratitude. In recent years, I’ve learned that people can’t read minds and even if you think you’ve expressed thanks extensively, they may not be listening for it in the way you’re trying to share it. I’ve also found it easier to say thank you in private; I’m not much for production. Do what feels right for you and do what will best get the point across to those who need to hear it. I’ve missed out on opportunities in the past and wished I’d heard similar messages from folks while relishing those times I’ve been on the receiving end.

My request to the graduates of 2012 is to find the opportunity in the midst of the madness, the balloons, and the pride to say “thank you.” More powerful words have never been spoken and I’m willing to bet less expected at a time like this.

The world may be yours, life may be tough, but you’ve still got someone willing to be there in some way to help you reach your goal. Don’t forget as they’re telling you how proud they are to tell them how much you appreciate them.

P.S. I’m taking this message to heart as I’m crazy enough to apply what I learned in college to find a few folks I’d lost touch with just to get the chance to say thanks. I’m sure I’ll get critiqued on my choice of wording and the still impossible task of editing myself (I don’t think it’ll ever really get any better). I’ll also probably be questioned about my ability to find some of them as easily as I did – or not. We’ll see.