Three years of fun and valuable lessons (and more coming) 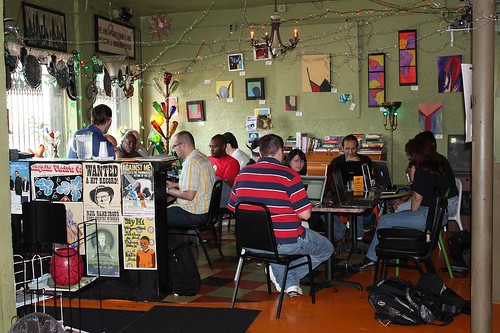 Normally I’m already swimming in a sea of details that don’t make sense to most of the folks that know me.

I’m normally worrying about t-shirt sizes; if we’re sure the venue secured in late March/early April really is secure; if there’s truly the right mix of sessions so that the seasoned user is just as satisfied as the newcomer; is the WiFi really going to cooperate…

I’m normally running around like a chicken with its head chopped off worried that something will go wrong that we didn’t plan for. I’d then normally be sat down somewhere while one of the corps of volunteers handled it flawlessly.

WordCamp Birmingham helped me connect with folks I never thought I’d have a chance to and made me fight the fear of flying to head out to San Fransisco to make sure that I saw the big  one before I attempted to take up the challenge to organize one here in Birmingham, AL.

It’s caused me great stress but always found a way to make me smile after seeing how many people were gathered ready to share what they knew about WordPress – whether they were a presenter or a participant; a developer or an end user.

Folks in Birmingham, AL were able to benefit from hearing from a TED fellow how an online publishing platform helps continue to fight for equality and civil rights in the Middle East. They’ve heard from the mouth of its best known founding developer (and barbecue expert) about its future. Most importantly, they’ve learned from and connected with others across the Southeastern United States.

This year though, I’m swimming in details about September, but WordCamp Birmingham is not among them.

After my laptop was stolen in October I focused on trying to dig out of the hole it put me into. Betsy losing her job in late January meant I was focused on trying to fix a short term problem instead of implementing a long term solution. I never learned of the new procedures for applying to host a WordCamp and the date we’d announced after last year’s (September 17) was never submitted. So while I’ve been informed that there will be a WordCamp Birmingham this year, I will not be serving as its lead organizer. Those duties will be handled by Sara Cannon.

There have been enough folks asking me about it via email recently that I figured I had to let folks what I knew somehow.

I currently don’t know any other information about it but I’m confident that you’ll hear something soon. Incidentally, the domain was not renewed by the volunteer that held it for us, Jeremy Flint, because he wasn’t sure about what was going to happen next (just in case folks were wondering why the site isn’t currently accessible). The data’s all still available if needed and I’m sure you’ll soon see some updates from the WordCamp Birmingham Twitter account as well.

I do know that there’s been a Birmingham WordPress meetup group gathering in recent months – you’ll probably want to hop on over to the website or fan page on Facebook and follow the group on Twitter to keep up with upcoming events and efforts. Sara has also been an admin on the WordCamp Birmingham fan page since just before last year’s gathering so you’ll want to keep an eye on it for additional information as well.

Among the things I regret,is never getting a chance to truly thank the folks who volunteered and busted their butt to help make those events happen the way I thought they deserved to be. I keep hoping that’ll happen one day.

I can’t mention Jeremy up above without thanking Henry McBride for being a bigger backbone for these past three years than he’ll ever know.

I’d also like to thank the folks at the Virginia Samford Theatre, Innovation Depot, The Bottletree, Vulcan Park, Railroad Park, Rogue Tavern and UAB for letting us come into your spaces. OK, more like take them over…

Special thanks to Matt Mullenweg for throwing down that challenge back in November 2007.

I’m not sure if I’ll be able to attend this year depending on what date is chosen, but I hope to continue some of those conversations and relationships that started over these last three years.

Besides, I’ve still got a few sites built on WordPress…