After receiving an email earlier today, I posted the following as my Facebook status update:

would love folks to actually ask about what I do and get clarification before they start making assumptions. It’s tough enough talking to the folks that actually do understand most times…

While some folks agreed, it was clear that there are still some that assumed that my day consisted of writing stuff, watching baseball and hanging out at coffee shops. I’d already shared a definition for urban conversationalist recently. So I figured I’d share a typical day.  There are no normal days after all…

The day starts early enough. I used to set my alarm for 5 a.m.; then I remembered that I have a cat named Boomer.

After feeding him and his brother Ed (or convincing Betsy to do so), I end up sitting for about 30 minutes. Just sitting. Considering I’m about to spend about 12-16 hours in front of a computer, it’s nice to not worry about the email list or the website. 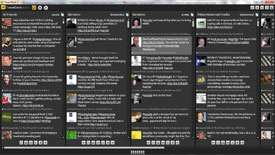 I hop on the laptop and it begins – at least the first wave. I keep track of several different topics using saved Twitter searches, including #bham, #bhm, Birmingham, #wjchat. I also maintain a list of local media outlets on Twitter via The Terminal’s account as well as lists pertaining to my original group of online friends from Plurk, economic development, folks I attended Hardly Strictly Young with and others. Any of those options can provide an idea for a blog post on any of my sites at any time. The lists also give me easy access to a group of folks that I can bounce ideas off of and get advice from. It slows that fire hydrant of information down just enough for me to get a handle on what I should be paying attention to in the morning. Part of that morning ritual once included chatting via Twitter with Andrea Lindenberg and Rod Carter during their morning broadcasts – yes, at 5:30 (why not?).

Most weekday mornings by 7:30 a.m. I’m sitting at Urban Standard waiting for the day’s Agile Self Development session to begin. Inspired by the focus of a SXSW session in 2011, the group was started by Scott Pierce though he’s makes a point to remind us he’s not our scrum leader. It’s been really helpful for me as it helps me have a reason to stay focused for the day on what’s supposed to be important versus attacking something that just happens to pop up. If it can help me accomplish my epic goal for the month, it’s necessary. 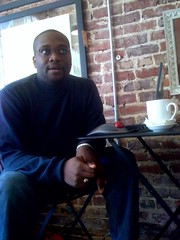 Those mornings I end up staying at Urban, I’ve realized that I’m not really there to get work done – I’m there to be seen and to catch people that I may want to talk to. It’s the one part about being an online publisher that’s still weird to me, but one I’ve learned to accept. That same conversation may take place at Trattoria Centrale, The Red Cat or Railroad Park – the point is to practice what I preach about online connections being part of a strong offline relationship with people. I’ve had several of my offline connections in this town recently decide to pack up and leave, meaning I either have to find new connections or decide what’s next. That growing tension is a constant part of my daily struggle now.

I start “the rest of my day” at 8:30 or 10 a.m. depending on if I decided to stay out or not. At that point, it’s me and the computer – and the persona of what would be a 100+ year old train station and all of the cracks, wrinkles and stories that she once held. The lists mentioned above are checked often, along with searches for anything and everything taking place on Facebook and area blogs. The continuing emergence of new community news sites has had me beginning to look at the site as more of a collection point, actually living up to the namesake. It’s interesting to see how several different people look at the same issue and what seems most important. It’s also been interesting to see how I became less willing to post things because I’d already seen it on Twitter. It’s helpful to remember that people aren’t always aware of what’s happening around them and that someone is always discovering those things for the first time.

Where I work from depends on what I’m focusing on for that day – and whether I want to occasionally be interrupted or distracted. Recently I’ve been behind a desk often available at the B-Metro offices in Pepper Place. When we’re not in the midst of a heat wave, I’ve got a “home office” which is still called into service for the purposes of uploading videos to the site. Sometimes a hidden corner at O’Henry’s at Brookwood Village is the destination while other times sitting near the fireplace at The Library in the Forest in Vestavia Hills is a better choice.

There may be a break around lunchtime (depending on the checking account balance), otherwise it may be something as simple as finding somewhere to sit and think (and unplug). Then it’s time to sit in front of the computer again until about 5 p.m. and then head home. Sometimes the work day and the afternoon quiet period are interrupted by things like live streams from journalism conferences or in-depth stories about my hometown. There’s also the occasional meeting or the chance to record someone’s comments for the website.

I still watch the NBC Nightly News in the evening – either the East Coast edition as it’s broadcast or the West Coast edition via iTunes – and PBS NewsHour. Sometimes you want someone to translate what you’ve been looking at as raw data every day. Plus, I’ve looked at local stuff all day long and it’s nice to have a handle on what’s going on everywhere else (and because Brian Williams is just that cool).

Betsy and I recently once again joined the world of cord cutters, relying on HD as we did when we first moved here. It means more time for watching videos online, playing Scrabble or just talking. It’s nice. If she’s feeling like reading a book, I get right back in front of the laptop, this time checking out Feedly to see if there’s something fun to read and writing to friends. There’s also those Google Analytics numbers that I need to review.

I eventually pass out on the couch with the BBC World Service or a Yankees game streaming on the laptop realizing that it’s time to try to get some sleep. Recently there’s been a book in my hand as I do so as I don’t want everything I do to be only online. I’m still plodding through Edward Rutherfurd’s New York: The Novel getting a refresher course on my hometown’s history in the process.

A tradition for the last year involves working from The Red Cat on Fridays as official “office hours” completely realizing that the bulk of that day’s posts need to be finished before 10 a.m. or else. Those days end most times with $1 Samuel Adams on their couch, normally with folks from al.com talking about the week that without too much pretense…

That’s of course not counting those days I take part in Twitter chats (#mybxb, #wjchat, #journchat or #localgovchat); research to organize my own chat (#bhamchat, returning in July); video and audio recordings and trying to get consulting proposals or my B-Metro column out the door. There are also the occasional speaking opportunities about writing online and some strategies pertaining to using social media.

Those baseball games used to be a lot more frequent when I was younger as were the days when sitting at The Gallery Espresso or Café Metropole in Savannah were just because I wanted to talk for talking’s sake. Every once in a while, if folks want to have that type of conversation – the one where it’s more about baseball or movies or cool books –  it’s still there for the taking. It may even lead to folks not making additional assumptions.

There will still be folks wondering what it is that I do, and that’s fine – that’s what the comments section is here to help clarify…