Random Shots: The Symphony under the stars 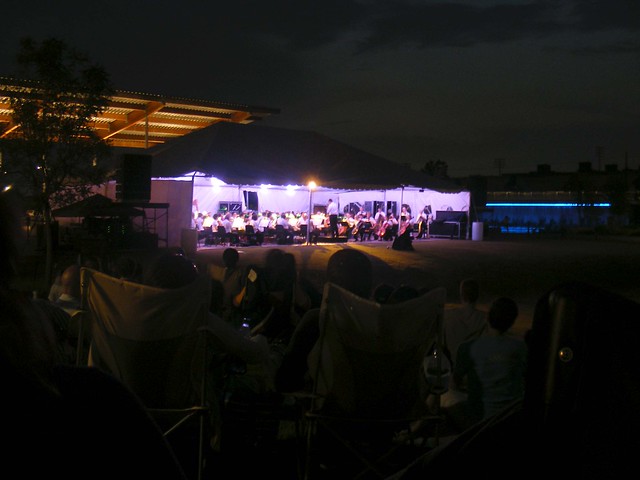 We’ve lived in Birmingham, AL now for nearly seven years and last night was the first time I ever got to enjoy the music of the Alabama Symphony Orchestra outdoors. We headed out to Railroad Park to attend the first of three concerts being held there this weekend, their new Symphony in the Summer series.

The highlight for fans of the symphony in previous years was the chance to watch them perform in Caldwell Park in the city’s Highland Park neighborhood, part of their Sounds of Summer series. They were performances that folks were willing to pay for to enjoy.

Last year they moved indoors to the air conditioning and rain-resistant Alabama Theatre downtown. I never had a chance to go to any of the events as of yet. There was something pretty calm and relaxing about enjoying the sounds of Mussorgsky and Dvorák. It was also another opportunity to enjoy the city’s skyline and seeing people willing to check out what’s happening downtown.

I hadn’t enjoyed sitting out under the stars while enjoying a symphony orchestra since before we left Savannah. It was a nice reminder of the simpler things in life. It does make me wonder not necessarily what’s new, but what’s the next thing folks will be willing to explore? Maybe this year’s edition of Jazz in the Park for starters?