Hopefully more than just a blip on the national media radar 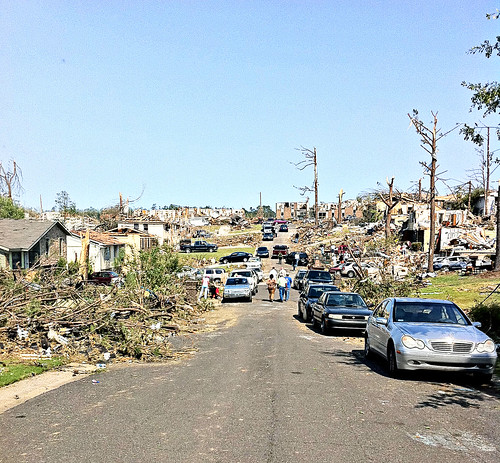 I saw the tweet, heard the announcement, poured a glass of wine and tried to put the previous week in perspective. There were several mixed feelings, but there was also a need to think about how to help where I live now.

Nearly ten years ago my boss called me into work knowing it would make more sense to have me at the desk than sitting at the house wondering if my brother was OK in lower Manhattan. I’ve shared my thoughts about that day before so it may help to read them instead of me attempting to rehash here.

Sunday evening, what’s now considered a simple exchange via text message between my brother and I questioned the timing of the President’s statement but quietly acknowledged the end of a chapter of life that changed the complexion of a country and a generation.

A few days earlier it was his turn to check on me shortly after a storm of epic proportions created a path of destruction through the heart of Alabama the Beautiful.

For those families that haven’t had power for several days, lost their homes or lost loved ones, a muted celebration probably took place upon hearing of bin Laden’s death. Thoughts ran through their minds though immediately of what to do next for their neighbors in need.

I’ve tried to take part in the regular weekly online conversations but I keep wondering just how much the rest of the country knows about what happened down here in recent days. I keep hoping that more people are becoming aware of exactly what happened, but I’m not sure. I do know that Royal Wedding coverage apparently did well for networks this year. There have been exceptions, notably Brian Williams’ decision to return from London and broadcast from Alabama on Friday evening.

We don’t read from the same informational hymnal anymore per se; there are some who choose not to plug-in at all, content with knowing only what happens in front of them. Our up-to-the-minute lifestyle wants instant gratification and a new top story to focus on as soon as possible.

I realize that my view of the level of attention is skewed by my intimate relationship with social media tools. Those of us who are “regulars” in the scene seem to feel a need to stay ahead or on top of the latest and greatest, sometimes needing to be nudged to remember something what’s already happened and how it affects that “new hotness.” As a result the “it” story of the moment changes constantly. There’s thankfully been a steady stream of individuals making sure folks know about #WeAreAlabama, #ALtogether and #tornadorelief among others. If they’re not on Twitter, they’re trying to raise their collective voices using whatever means necessary.

It’s not like the SEC hasn’t pulled together to help its own in this time of need. I don’t worry about the generosity of the people of Alabama either. I’ve seen them give for victims of Katrina a year later. The outpouring of support during the Gulf Coast oil spill was incredible. Corporate responses has also been impressive, with Regions Bank, Kohl’s and Talladega Superspeedway committing funds and Tide and Duracell rolling into Tuscaloosa to offer assistance.

They still need a few more voices to join in and help raise awareness.

I worry about whether or not the attention necessary to rebuild and move forward from outside can be maintained for the weeks and months ahead if we don’t get some more attention. We can get worn down. We can feel as though folks aren’t listening…

I’d love to see every as many folks online as possible dedicate at least one tweet or status update to the relief efforts taking place in the Southeastern United States. Don’t worry about what hashtag is being used or who gets credit for starting it (though from what I’m seeing #WeAreAlabama is the closest to being able to trend).

Or maybe the crowd may know of a better way to raise awareness? Sometimes it’s better to get folks thinking about what’s going on and see what they come up with…