I just got home from a party – three to be exact. The holiday season is always full of them (and apparently never enough time). I’ve just not gone out to as many as I have in the past, meaning that it should have been tough to come up with one to describe to accomodate today’s #reverb10 prompt:

Note I said “should have.” I’d say there’s no clear winner for THE social gathering in 2010 though here were some great moments scattered throughout. 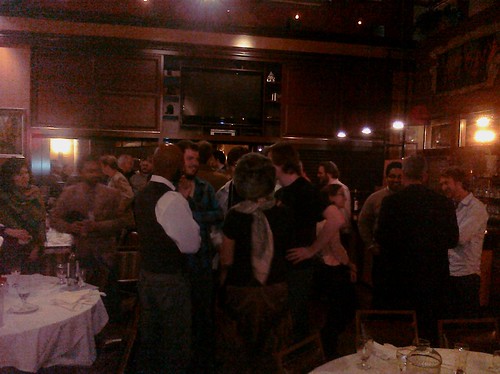 I started the year out in the Holiday Inn Mart Plaza taking part in a digitally-enhanced taste test for Dewar’s as part of a pre-CityCamp Chicago event. This was after I’d had a couple of microbrews and enjoyed the view out the window of a portion of the Windy City’s skyline. We probably had just as much fun the following night at Pompei (that’s where the photo’s from). I got the added bonus of finally meeting Sonny Gill in person.

Fast forward to the Birmingham Magazine release party at the almost completed Railroad Park celebrating their Green issue this spring. Hard hats and burlap were the fashion accessories of the evening as we took tours of the site via golf carts and ate hot dogs and sliders (among other things) under a tent on 1st Avenue South.

That park was revisited in mid-September for its opening as butterflies were released and smiling faces of disbelief filled the space. The image that still stands out to me was of Operation New Birmingham president Michael Calvert walking across the bridge along the upper path as night began to fall on downtown. Just as he and his wife reached the center of the bridge, the band performed Etta James’ “At Last” probably capturing the sentiment of Michael and many others gathered in the park that night.

Probably the one night of the year that comes closest to being THE night was September 24. The link takes you to what I’ve already written about that night, and while I still probably haven’t shared enough details, the entire evening ranks up there as a great networking opportunity.

How do I create more opportunities to socialize in the coming year? When I lived in Savannah, I got in the habit of inviting folks over, just because. I think trying to get back into the habit of doing just that should work, though the first couple of times we went a much more organized route. We’ll see what happens in the coming months.

Of course, that means finding a community you want to share your time with…