Where do you find community?

Where have you discovered community, online or otherwise, in 2010? What community would you like to join, create or more deeply connect with in 2011?

You would think that this one would be easy. I ended up spending most of the morning trying to figure out an answer. 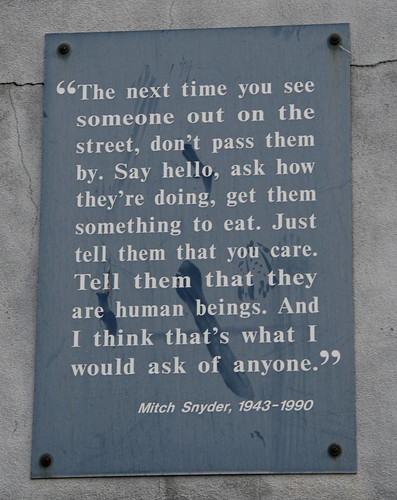 I think it’d be safe to say that I spent most of 2010 and will spend 2011 looking for a community where I feel like I fit in. I stumbled across a statement today in another post based on our prompt that rings true with me: I want to belong to a community and not just contribute to it.

This isn’t to say that I didn’t find new people or groups along the way this year. What I guess I long for is that day when I don’t feel the need to bottle up a few moments to access often as a tonic but have many moments that I can reflect on simply to smile.

Digitally I’ve continued to reach out and add to a network of people who I like to learn from and talk with, though you can’t get a hug or just say you want a cup of coffee or a beer with only a moment’s notice (at least relatively speaking). I look to the digital world as a vehicle to make it easier to connect instead of a substitute. Several projects, including #reverb10, have exposed to new people and conversations that give me more opportunities to find new communities to join.

Like I said though, I did find community this year:

Perhaps it’s too loose of a definition that I’m using, considering that sometimes I can feel a part of a community while talking with just one person. It’s better than being alone though (paraphrasing from a certain performer’s signature song).

I’ll never be able to join a new community without meeting new people, so one of the goals for the coming year is to continue to find new ways to meet people and reach out just a little farther than I’m normally comfortable doing. I’d also like to learn more about and become active if possible with To Write Love On Her Arms.

Finally, I’m hoping to have a leadership role with the local Jaycees chapter. I’d like to use it as a way for those of us who can’t always answer the ice breaker question “Which high school did you go to?” with one in metro Birmingham to work on new ways of developing leaders with all of the tools necessary to be successful while helping them feel as though they truly belong to a group of friends.

All of this is probably too much to ask, but having a community to turn to in both goods time and bad should be possible and accessible for everyone, shouldn’t it?

Where did you find community this year? I’m looking forward to the responses.