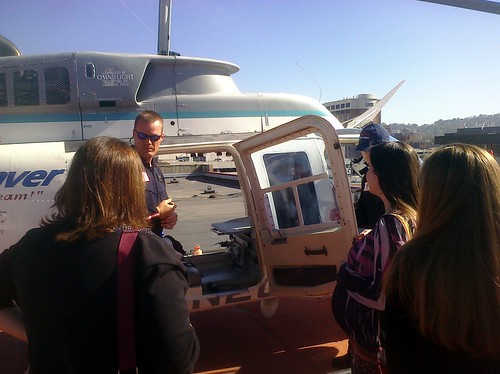 Mike Warren‘s words still play in my mind every time I see the CARE Flight helicopter fly overhead wherever I am in metro Birmingham.

He spoke at an Operation New Birmingham breakfast briefing shortly after becoming the CEO of Children’s Hospital about three years ago (having just left Energen).

Warren asked those in attendance to realize that most times when you see the chopper flying overhead that you’re seeing a patient being transported to or from the hospital. It was a sobering reminder of the vehicle’s primary purpose.

As I stood on the roof of the hospital’s current home watching cranes move off in the distance working on their new one, I learned of how frequently he is reminded of the purpose. His office is located beneath the landing pad area.

I was up there as part of a group of area bloggers invited to tour the hospital and learn more about its operation. None of us were aware of the opportunity that would present itself to us today. I was particularly taken aback as I’d just added flying in a helicopter to my current 101 in 1001 list last night thinking it was a long shot – mainly because of how scared I am of flying in general (and in spite of how often I end up having to do just that).

The flight over Jones Valley and greater Birmingham took us down along U.S. Highway 280, flew us back up towards the city’s east side, allowing me to finally see Trinity Medical Center and Ruffner Mountain Nature Center from the air deliberately before flying over the house in Norwood, getting an up close and personal view of the city’s skyline, a gorgeous view of Railroad Park and an impressive overview of UAB‘s campus.

I gained an appreciation of the close quarters that the medical staff have to work in flying high above the hustle and bustle of everyday life as they work to save the lives of some of our state’s youngest residents. I also got a better understanding of one of the comments that Chris Brogan made while he was visiting the city earlier this year – the lack of visible boundaries and the boundless potential for the region.

The ability to fly over a city of dreams as I attempt to restart mine was greatly appreciated. Now the question is what to do with the enthusiasm (or how to regain it). It’s also a chance to ask all of you what your thoughts are about the future – either for yourself or for the city you live in…

Photo: Before the flight. acnatta/Flickr.