Walking amidst the dream 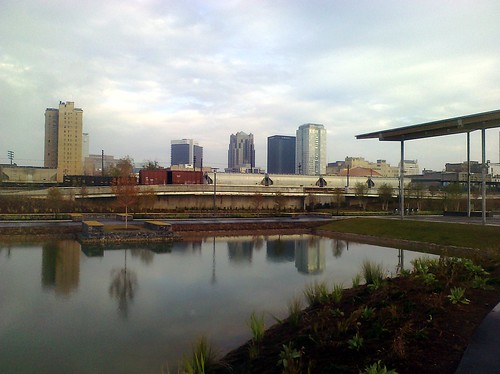 I’ve made it a point to stop by Railroad Park at least twice a week since it opened back in September. It may be seen by some as overkill (specifically considering the resulting Foursquare mayorship) but it’s definitely given me a place to escape in recent weeks and a place to visualize hope on several levels.

For those visiting the site and not current Birmingham residents, Railroad Park is the city’s newest urban outdoor space, the first major park constructed in the city since W.C. Patton Park off of Tallapoosa St on the city’s east side.

It was developed via a public/private partnership as a way to provide an outdoor living room to the state’s largest city and to fulfill a long-standing dream of many of the city’s natives. I’d argue that it’s become more of an urban escape and that’s a great thing indeed.

The 19 acre section currently open is what members of the Railroad Park Foundation hope is the first part of a linear park that would connect the city’s central business district with UAB‘s ever-growing campus and eventually Sloss Furances (and Pepper Place) to the east. It would be part of an even larger movement to connect each of the members of the city’s Three Parks Initiative – Red Mountain Park to the west, Railroad Park and Ruffner Mountain Nature Center to the east – helping to fulfill the promise of the proposed park plan developed by the Olmsted brothers in 1924.

It’s an ambitious project by any stretch of the imagination, but fitting for a city that was challenged long ago to dream big dreams for itself.

I’ve held off writing about the park because I didn’t want to add to the chorus singing its praises as the ultimate change agent for the Birmingham region. I’m still a couple of weeks away from writing a piece of what it may mean for the region over on The Terminal.

I do think that it will serve as a microcosm of what I’ve noticed throughout my stay in Jones Valley. It is something that cannot be described as well as it can be experienced. It is also something that is known about by a lot of folks, even though that number still pales in comparison to the amount of people that need to know about it. 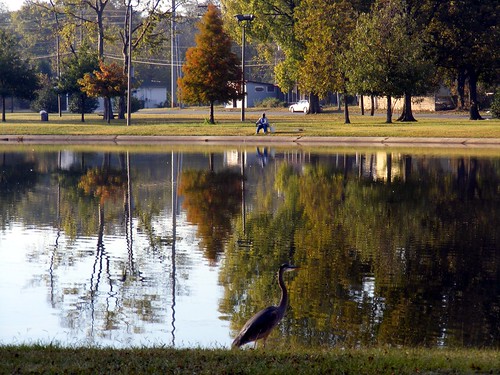 It’s particularly interesting to me when I realize how many times I drove by W.C. Patton Park in the past six years before finally stepping foot in it and sitting alongside the man-made lake last Monday. Current plans being discussed as part of the Our One Mile initiative should make an error like mine from happening as often in the future. The park is already one of the most popular ones in the city and is seen as an anchor of the long-planned Village Creek greenway project, which when completed will extend all the way to Ensley and other points in western Jefferson County. That and the marker contained within helps remind residents of the importance of the city’s east side.

It was still nice to feel like an urban explorer again even if there were many who’d already claimed this piece of land as their own urban escape. It leads me to think about one of the reasons I started this blog in the first place – to chronicle a journey that many who live here haven’t even been on yet. It’s interesting to think about what’s around the bend…

NOTE: On the date that this piece was originally posted I was serving as an officer on Ruffner Mountain’s board of directors.