Food for thought, comfort and community 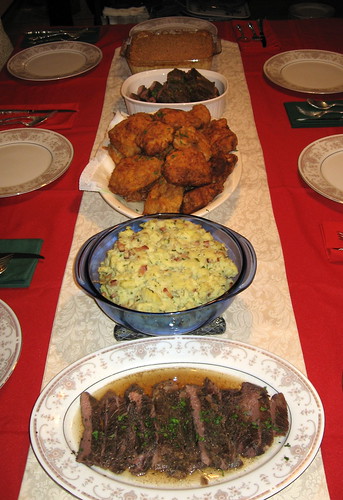 I had visions of spinach-avocado-artichoke dip dancing through my head last night.

No, I didn’t make any. I actually haven’t in a long time, but I’m looking for a reason to do so soon – so let me know if you’ve got an opportunity for me to do so.

The dip came into being as a result of a lot of experimentation. There’s still no actual recipe for this thing either. At least it’s not written down anywhere. There were failed attempts to be sure, but in the end it was a chance to learn and enjoy something that I’d made on my own.

Whether failing or succeeding, during those last three years in Savannah I had a community around me that made the journey enjoyable.

Food has this insane link to community for me. I’ll argue that we did ask “what do you need to drink?” a lot in Savannah but the question of “what do you want to eat?” normally followed. Last night I got a chance to share stories about how important community was in my life – and they centered on food (even if it was only what brought us together).

It’s probably one of the reasons why I believe that offline interaction is necessary in this supposedly virtual world – and that there’s always got to be food there to enjoy.

One I did not share (until now) was the first Thanksgiving I spent living near the Savannah Golf Club. I ended up hosting a pretty unique gathering of folks at the house. Five friends (only one of whom was from Savannah) crammed into my small living room waiting for the turkey to finish cooking. I’d already spent my first holiday season away from home the previous year and didn’t particularly like being alone. That Thursday afternoon was the first taste of something that I never got to truly enjoy until years later.

The first Thanksgiving I spent out on Tybee Island in 2001, I got to enjoy that feeling of community again. All of us Northerners were gathered on Bob’s and Dave’s decks enjoying insanely warm weather. We all made phone calls to our families to let them know just how warm it was and how much fun we were having wandering down to Tybee’s South Beach compared to the snow or cold temps. We’d make our favorite side dishes and start showing up just after the parade signed off and before folks got too involved in football games…

Now we did happy hours and we’d go out to restaurants and eat, but nothing ever seemed as much fun as going over to someone’s house, sitting on the front porch, courtyard, deck or living room and enjoying some food and conversation. We did it often – almost weekly – for three years.

There was always an excuse to get together – whether celebrating an accomplishment; gathering for support or just because we wanted to. We had Boy’s Lunch – our endless search for dives with great food long before the Food Network series appeared on the scene. We always seemed to have someone needing a housewarming too. We even set up an email account that had everyone’s addresses stored – and anyone could “pull the emergency cord” and get a group together within hours of sending the message. We didn’t hesitate to use it either.

We’ve had to find additional excuses to gather now that we live so far apart. Our shared email account that helped us let everyone know where we’d be meeting up has been replaced by Facebook and the gatherings are now reply threads. Some of the crew still find an excuse to meet up once a year on the coast.

Part of me thought it was because of the coast that I missed being in Georgia. Last night was the first time I realized that I missed the spur of the moment community that I had.

It took me eight years to truly get to that point in Savannah, so perhaps I’m being slightly impatient. I’m noticing that finding the type of community that is not always worried about networking or being seen and more about being that portion of your family that you indeed get to choose is showing itself to be extremely important. I’d argue that those areas where several of those communities exist are ones that are quite successful and appearing to be on the move.

I’m thinking I may still find that group here or I’ll be able to pull one together. Betsy and I have this insanely large front porch and I haven’t made that spinach-avocado-artichoke dip in some time…

If you’ve got any stories about food and community, feel free to share.