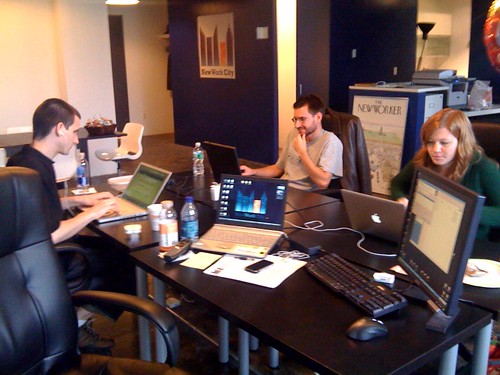 I’m working on a coworking space (and something more)!

I’m learning that silence is something that doesn’t always serve you well when you’re trying to get reorganized, especially in a city that appears to live as small as Birmingham does.

I’m working on finding enough people to create a coworking community in Birmingham.

I know that there is already another group of folks working on creating their own coworking community on the city’s Southside and that others are already trying to operate spaces that are meant to encourage coworking elsewhere downtown and in Woodlawn. I think that all of these communities can and must survive for Birmingham to move forward. I still move forward with developing plans for another one.

I started The Terminal in hopes that a vibrant community of people would be driven to work together in order to highlight the important (and sometimes quirky) things that make this city I choose to live in great – despite the naysayers. The plan for the site was to create both a virtual and physical space where those conversations could take place at any time and where those interested in seeing just how exciting Birmingham could be. A place where projects and series tied to the website could start out and grow into things needing larger spaces to hold them.

The virtual space has had its ups and downs, but the longer I’ve been at it the more I realized that the offline component needs to exist for it to be able to do what I’ve wanted it to do. I’ve sat back and taken the easy way out of attempting this on numerous occasions. I felt that rather than force that hope and vision on a group of people that may not want to accept it, wouldn’t it make more sense to find those interested in making it a reality?

So I’m taking one more risk.

If it works, The Terminal gets a physical home and I get to see if my ideas about new media organizations will actually work. If it doesn’t, at least I know that I tried, regardless of what individuals may think – and maybe I’ll end up in one of those other spaces (or somewhere else). But at least I won’t be wondering what could have happened…

Why share this here? I believe sharing is the only way for a community to truly move forward. Hoarding information in this instance would be insane and pointless. Plus it’s an easy way to find out who else may be interested in making it a reality.

How can you help (if you’re interested in doing so that is)?

There’s a survey that I’ve created to gauge interest metro Birmingham’s overall interest in coworking. I am planning to close closed the survey on May 15 and share have shared the results online the morning of May 16 here so that all of those working to advance the idea of coworking in Birmingham can benefit from the results. I’ll be organizing a meeting of those who asked to be contacted for more information around that time as well.

NOTE: The meeting is scheduled for July 14, 2010. More information is available in this blog post. The survey will be reopened in the near future for those that were not aware of it originally and are interested in getting involved.

If you’re interested in seeing what can happen in any of this space (or any of the spaces in Birmingham), fill it out or at least pass it on to someone who may be interested. I’m already half way to my goal of 100 responses, but I’d love even more if possible.

I’ll keep you updated on the progress both here and on the new section of The Terminal created for this project.

I’d also be interested if you wanted to find out more specifics or had some ideas of your own. There may even be a few of you that know of other ways to help. Contact me via email and we’ll figure out a time to meet and talk.

Thanks in advance for any help you can provide!