Back in the saddle with a new laptop 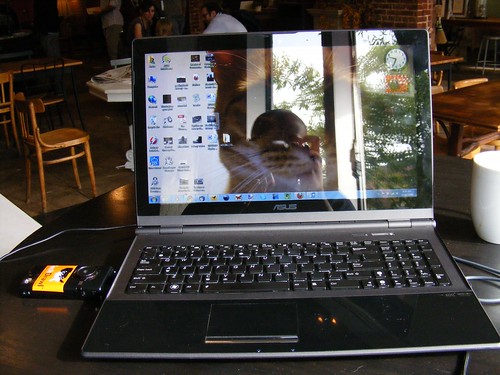 So you’d think this was an easy issue to deal with. As I’ve mentioned previously, John Garrett set up a page on one of his sites to raise funds to help me pay for a new laptop to replace the workhorse I’ve had for the last two years. Well, this is one of those cases where things just seemed to work out…

It was honestly about to be a choice between using the funds raised to pay the bills or to purchase a machine that wouldn’t quite do what I needed it to do.

I’d gotten to the point that I’d started using an external keyboard and mouse to use the HP, but then it wasn’t even starting to help. I’d just gotten back from talking to my senior minister about a few different things, including how to approach figuring out a next steps plan when the old machine wouldn’t even start. Attempts to get the important files off of the hard drive took a little longer than we thought it would, which led to WordCamp Birmingham not quite coming off as polished as I’d hoped.

I’d also just found out that any attempt to have a working phone meant that a laptop would have to wait.

Without going into too many details, come Monday afternoon, I’d received just enough business from bhamterminal.com and Urban Conversations to pay the bills and to cover the difference between the amount of money that had been collected and the cost of my new Asus UX50 ($719 after taxes) in addition to the bills that were due.

The new laptop does everything that I need it to do and maybe a little bit more, of which I’m extremely thankful. Thankful not just to those who donated but those that have enough faith in The Terminal and what I’ve learned while attempting to hang a shingle out to let me contribute to those projects just a little bit.

Then there’s Stephen Vinson. See, he’s the guy who figured out that the old laptop had a faulty hard drive which led to its supposed demise. While we’re still trying to figure out all that’s wrong, his donation of a new hard drive for it is appreciated as well, meaning that a backup machine is only a stone’s throw away.

I’m still trying to catch up on emails and getting all that I need loaded onto this thing. So while my Facebook and Twitter updates are frequent – emails and documents owed are taking a little longer than I’d hoped. But once this thing is running on all cylinders, what better way to say thanks than by getting back to being a digital nomad?

Photo: The new laptop from the front. acnatta/Flickr

Not really sure how I missed this post but wow, glad you got the machine and hope by now all those cylinders are firing perfectly for ya. I know how frustrating it can be to have to fight with the technology just to get the good stuff done. It really shouldn't be that hard. Guess that's just life sometimes, huh.

Glad you got the machinery sorted out. It can certainly be frustrating!
Been kind of heads down getting my new stuff ready for the big show in Boston.

Yeah, they kept asking me if I'd ever spilled coffee on mine... Kind if wish I had; it would have been easier to diagnose.

This one is great, though there are times when I can tell the difference between a dual core and a single core processor. I'm just grateful for the opportunity to have one again and hope that posts are interesting.

My laptop(an iBook G4) died a long, slow death over the course of many months. I was finally unable to resurrect it this summer. My roommate, a computer science major, informed me that I probably have motherboard issues, but it's also been dropped and had coffee spilled on it. Now I'm borrowing my husband's little Averatec laptop, which functional for basuc internet purposes, but not what I'm used to! Hope your new one works out for you!