About that new phone (finally) 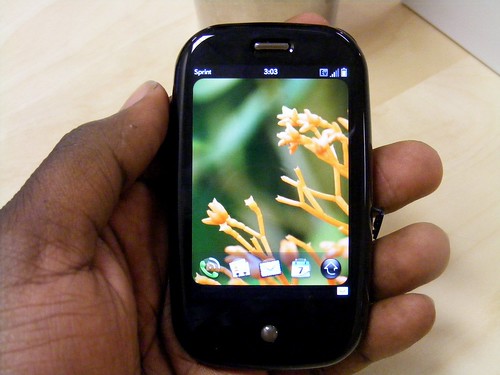 I’ve had some folks say that I’m just a little too excited about my new phone – a Palm Pre on the Sprint network.

I’ve even had a few folks say that it’s almost like I have a new toy.

I started writing this post in December but decided I’d wait until I’d had some time to really try it out to pass judgment.

The best way to sum it up is to say that I am now about as connected as I possibly can be.

I did luck into getting the phone. Those of you who visit this site occasionally may remember that one of the posts from late last year sang the praises of my new laptop. Well… that computer suffered a bad processor and a corrupted hard drive in late November. Asus stepped up and said they’d allow me to swap it for a new one once they figured out they couldn’t repair it due to no longer carrying 500GB hard drives.

I got an HP Pavilion dv4 (on sale no less), leaving me with just enough money to purchase said smartphone. The extra bonus was the $15 off coupon that let me get the phone for an insane deal.

Now I will not call it the iPhone killer since I’m not one looking for one. I will call it a game changer.

It is my first smartphone, though I did own a Dell Axim X30 that did a pretty good job being an extension of my life for a while. This phone picks up right where the Axim left off.

One reason I’m probably enjoying the phone as much as I am is the fact that I’m not looking for that many apps right now. I need ones that actually provide usefulness (though I’m loving my light saber and Radiotime apps). I’ve actually found that the web versions of Facebook and Twitter do exactly what I need them to do. I’m looking forward to using the Wells Fargo banking app as well.

I wished that LinkedIn’s mobile presence was stronger, but it’s OK. More important to me is the benefit of the phone’s Synergy technology that allows me to access contact information from profiles maintained by friends on Facebook and LinkedIn, making it easier to connect. The interface is easy to use as well and while I wish the buttons on the physical slide-out keyboard were a little bigger, I do appreciate it – a lot.

I was most excited to have access to a Pre-specific Evernote app allowing me to access what’s easily become my favorite online tool – an extension of my brain as some have suggested.

Pre owners were recently given the ability to shoot and edit video. The photos taken with the camera have been quite clear and I’ve only shot one video, but it turned out well. I do wish that we had the ability to zoom in on objects when taking photos or shooting video. I’m hoping that they’ll give us this capability (or that maybe I’ll figure out how to get the OS to do it) soon.

The battery life has not been as much of an issue as I thought it would be. I have found that the USB cord allows me to charge easily when using its outlet adapter I’m beginning to have issues charging directly from the computer. It does charge quickly. I’ll admit that I still haven’t read the manual for the Pre, so I’ve probably only scratched the surface – even after all of these months – in terms of what it can do.

The recent purchase of Palm by HP makes me feel much more confident about being able to use the phone in the future and supportive of what this phone and its operating system will enable me to do in the future. I’ve signed up for the web-based Ares development environment, hoping to gain some mastery of webOS and how it works.

I’d recommend it to anyone that was looking for a practical smartphone. It’s been quite useful as a business device and there are days I’ve operated almost exclusively on it. I’m thinking it was a great purchase .