Huddled masses serve as a reminder 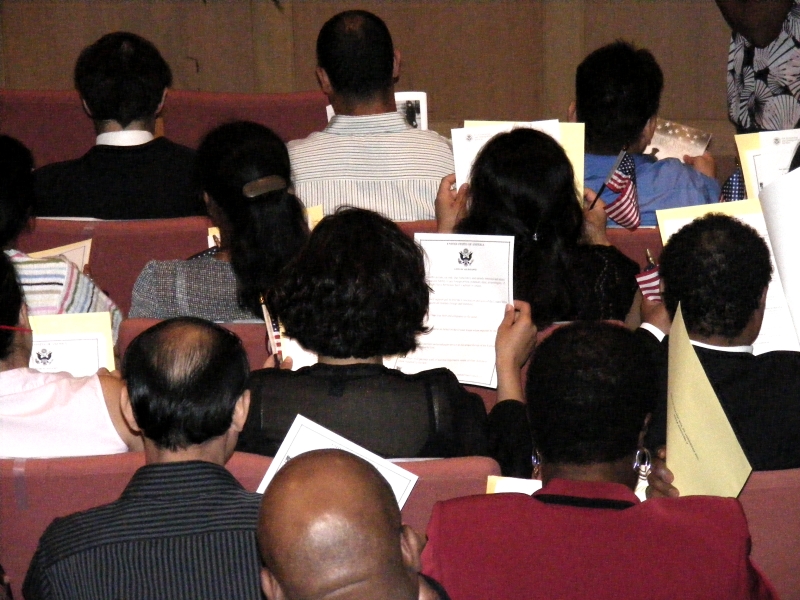 I never got to see my grandmother take her oath of allegiance to the United States of America in 1996, but she was extremely proud of that moment of her life. I remember hearing it in her voice…

My mother also became a citizen on that day – she’s the one that made the phone call afterwards to let me talk to Granny. There was some excitement there too.

I found out that my father was becoming a citizen only because he told me in passing while we were driving around one day. It happened on his 65th birthday. I didn’t see it either, but he mentioned it in passing when I talked to him that day on the phone.

All three of them became citizens long after arriving in this country. As much as any conversation with them would normally lead to fond memories of Trinidad, they chose to become citizens of the United States.

Today, I had the chance to watch (and if you click on the YouTube video to your left, you will have too) the wonder and awe of sixty individuals, representing 30 countries, as they completed their journey of choosing to become citizens of the United States of America by taking the Oath of Allegiance. Charlotte Donlon and I decided to go ahead and attend the event this morning. I’m glad I did.

The Honorable Sharon Lovelace Blackburn presided over the ceremony and reminded the participants of the responsibilities that come with the words they spoke this morning.

The event was significant since it was the first time that the naturalization ceremony took place outside of the federal courthouse of the Northern District of Alabama. Instead, the candidates, their friends, family and observers enjoyed the setting of the Steiner Auditorium at the Birmingham Museum of Art.

The act of being an citizen of the United States and what that means is something that most of us born here take for granted. Many of us do not even think about what it means and how that is tied to doing our part to make it work.

The ability to dream that we enjoy comes with a responsibility to serve and give back when possible in whatever way you can. No, everyone does not realize their dreams (yet), but the fact that it’s more possible here than in most places is important – and something to celebrate when compared to elsewhere in the world. 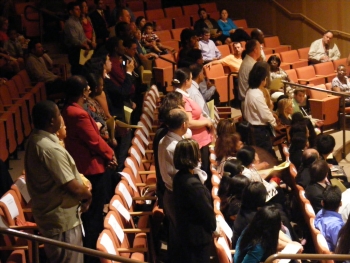 These people wore their dreams and hopes on their faces today and beamed with delight as they exited the auditorium. Their enthusiasm – and that of their families – could be felt in the room. They stood and said their name and where they were from originally earlier in the ceremony, eager to embrace the mantle of being an American citizen. They each carried a story of hope and determination that is a nice reminder of the potential drive we all have within us.

Judge Blackburn’s words were particularly poignant and sobering considering the fact that we’re in the midst of an election cycle. It’s an opportunity to practice one of the most important rights afforded to a citizen – the right to vote. Exercising this right means more than pushing a “Like” button on Facebook; it means becoming truly acquainted with an issue or persons before blindly filling in a bubble based on party affiliation or popularity. I could hope that politics become less of a sport and more of a process, but that may be hoping for too much.

I do know of a few people who will exercise that right next week as they understand the responsibility that comes with it.

There was a gentleman I noticed when I first walked into the Steiner Auditorium. He looked over the paperwork handed out before the events of the day with a palpable excitement. He shook the hand of the woman that handed him the certificate that physically confirmed that he’d just become a citizen of the United States.

As I walked out behind him, I saw him clutching the print of the piece “Flags” in his hand, his certificate safely tucked away in his back as he spoke on the phone with someone saying that he’d just become an American citizen.

The smile on his face was infectious and told of the pride he carried from the moment.