Checking out the Local scene in Philly

Yes, you read that correctly… the first post on Dre’s Ramblings in 2009 has to do with Philadelphia, PA. I’ve just gotten back from a month long adventure that you’ll learn more about in the coming weeks that ended in Philly, and in a really cool new neighborhood bar that I felt compelled to write about – especially for those regular visitors to the site that are beer afficiendos.

New Year’s Day found my friend Susan and I venturing out to the city’s University City District (specifically the Cedar Park neighborhood) and opening night for Local 44. It was after a day of fulfilling the first item on the new 101 in 1001 list – attending the Mummer’s Parade – despite the extremely cold weather (NOTE: the new 101 list will be up later this week, along with a retrospective on the one just finished on December 27, 2008) and finally getting a chance to meet and talk with Beth Harte on New Years Eve.

Why do I think our local beer lovers would love this place?

Take a look at the ever-changing beer list and then you’ll understand. For the record, I tried a pint of Yards Brawler and Lagunitas‘ latest offering, Hop Stoopid that evening. The crowd shots should let you know how many folks were excited to be there for the opening. They were probably also excited about watching the Penn State game on the LCD above the bar. 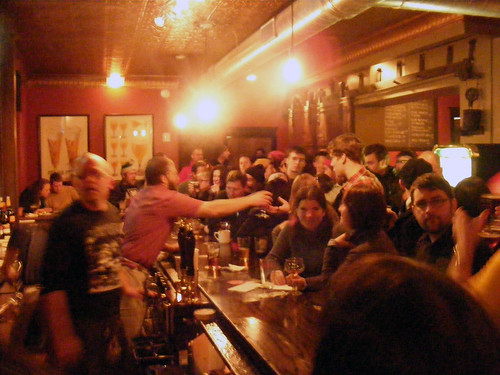 Most were probably showing their love for the food offerings, which were incredible. One member of our party was a vegetarian, so we got a chance to enjoy samples of an oyster mushroom po boy, a meatless Frito pie and freshly made kettle chips. I also caught a glimpse of chicken wings passing by at one point. It’s definitely a place I’d love to visit again whenver my journeys take me back to Philadelphia and makes you appreciate the local watering holes and coffee houses that dot communities around the country.

Speaking of visiting Philly, if you’re reading this post and just happen to be there on Friday, January 9, you may be interested in checking out an art show that includes works by Bottletree co-owner Merrilee Challiss at Vox Populi Gallery starting at 5 p.m. If you’re driving you could possibly check both places out (just saying).