I just finished playing around with Google’s newest service, Latitude, which allows you to track your friends using Google Maps (once you’ve been given their permission to do so). When I first heard about it, I thought of it as BrightKite on steroids. I’d seen some comments talking about the creepiness factor, but I wanted to try it before I passed judgment.

My partner in crime in this experiment was Ike Pigott. Actually, you could say that it was really Ike‘s idea to test out the service this evening since he’s the one that called me suggesting it.

So while I was sitting at the desk at the office (enjoying home Internet service for the first time in eight days) interfacing with Latitude using my laptop, Ike activated the tacking service on his phone. It showed both of our Google avatars located in downtown Birmingham. It then started to update about every 2 minutes as Ike drove from the city center out towards Leeds, AL. When I’d ask for him to give me an approximation of where he is, the map representation was pretty close to accurate, even with the lag. 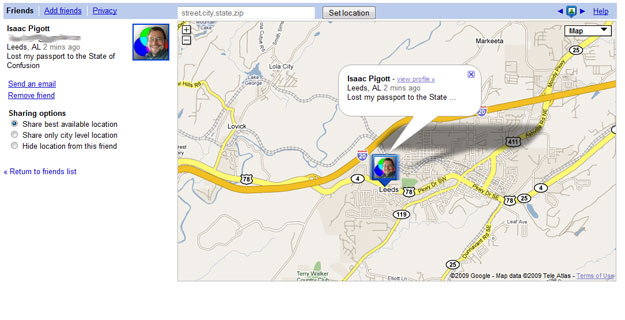 Follow the traveling Ike (and his head). Screenshot from our Google Latitude experiment.

The interface in the screenshot above is when you click on the map after you’ve added it to your iGoogle homepage, currently the only way to get access to it from a desktop or laptop. If people you are tracking are far away, it will provide you with the ability to “jog” between locations – around the country and conceivably around the world. There is a list of supported devices available and I’m assuming that more will be added as time goes on.

The list of possible uses that we thought of for the service, despite the initial creepiness factor, proved to be quite impressive and potentially game-changing on several fronts. Some of them included:

We haven’t even talked about the possibilities when applied to the world of journalism… but maybe that will be a good way to introduce something else later tonight or tomorrow morning. 😉

So is it still Brightkite on steriods. Not really, it’s got the potential to be a much more powerful service. Despite the ability to make the location status your own (short of your avatar), it provides a chance to have much more pertinent and relevant information.

The ability to control your privacy settings means that you can broadcast to the world and make yourself available to anyone at any time if you wanted to allowing you to always be “on” which can be positive or negative. Having completed this exercise shortly after reading a post about the generational differences between Generation Y and millenials (thanks Sam), I also started to wonder if this new service just started out as a way to feed our need for attention at every turn. Many of us are aware that most things don’t end up being used as they were originally intended, so this could become one of those “look at me” tools or it could help feed into Ike’s interpretation of Google’s future as a prediction engine of sorts.

If you’ve tried it out, what do you think about Latitude? What are some applications that we missed or should be thinking about?

Thanks for the interesting connection to my article about the differences forming in the generation.

Thanks for the interesting connection to my article about the differences forming in the generation.

I know latitude is not in the iPhone yet, but I am in Birmingham on Saturday and would love to hook up. Ping me on twitter @albertmaruggi

I know latitude is not in the iPhone yet, but I am in Birmingham on Saturday and would love to hook up. Ping me on twitter @albertmaruggi

This is going to be interesting. Thanks for being a willing guinea pig. I just might try it out after all.

This is going to be interesting. Thanks for being a willing guinea pig. I just might try it out after all.