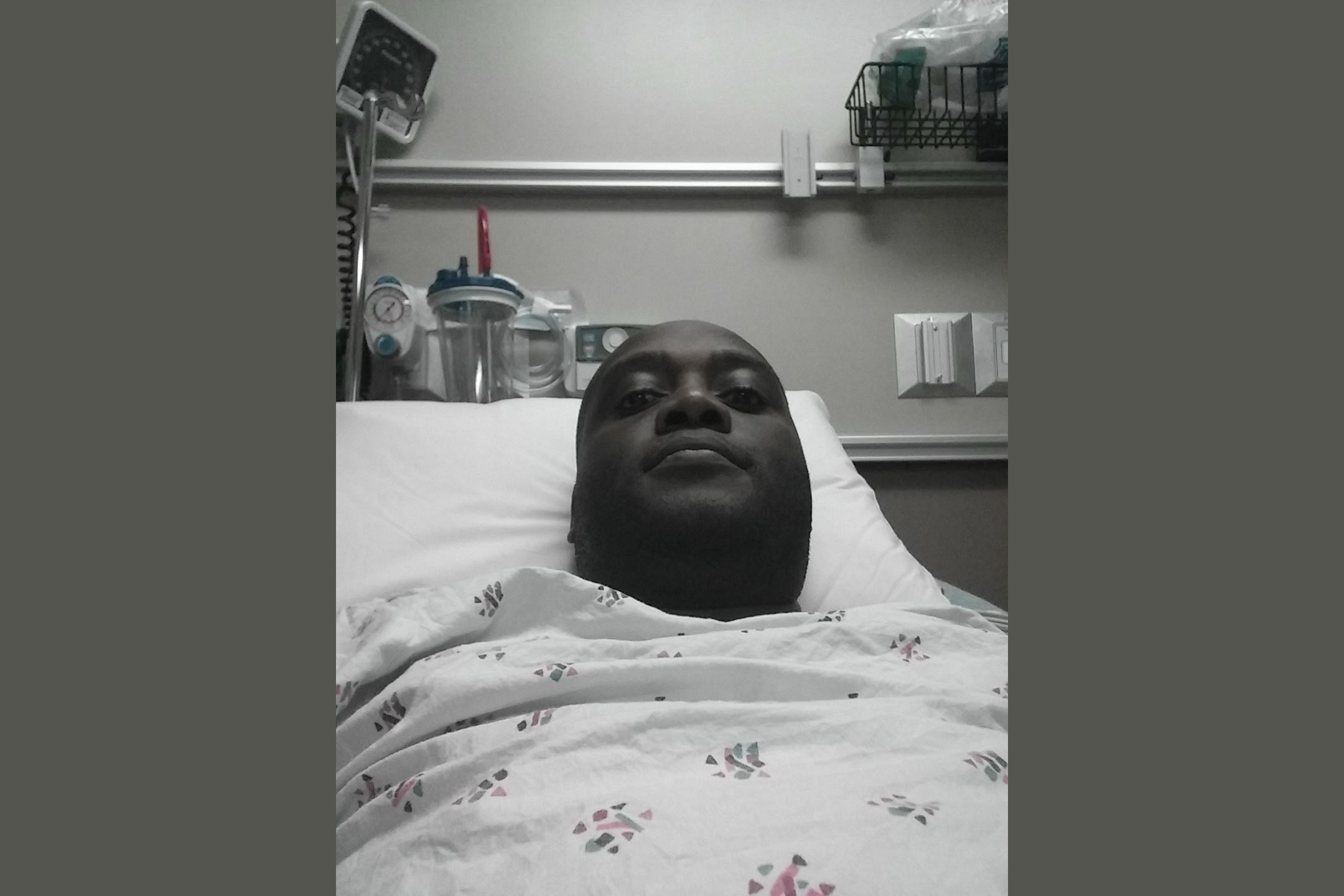 Time flies… Embracing the challenge of the last twelve months

The first photo I took laying in the emergency room on November 5, 2015, was a textbook example of how not to be photogenic. I really didn’t care how I looked, but it was suggested I try to show some hope. The result was a photo that was only seen on Instagram. I didn’t have a lot of hope when I took it, but it looked good.

If I have to wait, I can at least pretend to smile for a second…

I spent a significant portion of that evening exchanging messages with the husband of one of my best friends from college. He probably did more to help calm me down that evening than he realized. I’d been wheeled out of a room via an office chair moments before a public meeting was set to begin and told to go to the emergency room.

I’d just spent the last year doing everything I was supposed to do. I’d taken up yoga; returned to mindfulness meditation; and ate as healthy as one can when living in the midst of central Alabama and all the barbecue and hot dog options contained within. I’d just played my first baseball game in more than a decade at the oldest ballpark in America. I was doing contract work with meaning.

I’d also found myself unable to breathe while doing 60 m.p.h. on Red Mountain Expressway shortly after my birthday and just before a trip to Austin, TX (which I still need to write about) seemed to delay the inevitable hospital trip. Luckily, Betsy was in the car with me when I wasn’t able to maintain control of the car.

I learned while lying in that emergency room why there were nights I couldn’t move my arms and legs in bed (or open my mouth).

I’d learned I’d suffered several severe panic and anxiety attacks over a two-month period. Based on what the doctors would tell me in the coming months, I’d in fact suffered through them for years. At one point I was prescribed muscle relaxers that wore off within 20 minutes of taking effect. As a result, I couldn’t walk a city block without chest pains.

I didn’t tell anybody. It’s not like I wasn’t aware of the cause, but it wasn’t enough to just know. This is probably going to be the first time many people find out what happened and why I disappeared for a while. I didn’t think anybody would care. When I did tell some folks early on, they kind of said, “Well…” I stopped telling people what happened for a while.

I didn’t want to go out. Work was important, but I went from being able to juggle several things at once to just lying frozen on the couch.

It’s been a long, slow road back. I still don’t like to go out most evenings. I justify flying with knowing it’s an opportunity to escape the routine and check in with people I haven’t seen in a while.

I learned it’s not something we talk about in journalism or in general, the anxiety and the stress, but it’s needed as we move forward. People talk about pushing through and just doing. It’s tough to do without some feedback. This time, I learned it was time to find my tribe — and to accept it may be elsewhere. The resulting adventures and conversations have helped me function closer to normal than I have for some time. (The next journey begins Wednesday.) Pushing the reset button helped me remember the difference between acquaintances and friends. I need friends to survive, so recognizing and honoring the difference is important.

Some of those friends can only be contacted digitally, and I’m grateful for those connections. I recognize some will never understand how and why digital helps in this regard. This is one of those platforms I use to reach out and connect, and it’s one I hope to not neglect as much moving forward. We’ll see what happens, though. I hope haven’t monkeyed with my swing too much over the years.