Living on the stage 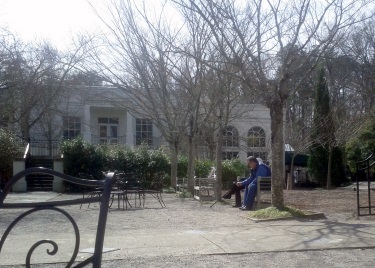 I was sitting at the Birmingham Botanical Gardens this past Saturday morning trying to get as much out of my head and onto the pages of a new journal as possible. A family of four wandered in to enjoy their lunch. When they were finished, the mother and father took turns showing their young daughters the fish swimming in the lily pond next to me.

An older couple slowly entered the Hill Garden, eventually sitting down in my line of sight. The sounds of heavy earth-moving equipment were barely audible, a sign of change happening across the street. The husband kept drawing in the gravel with his cane, guiding it slowly in an arc to gently tap his wife’s foot, getting a giggle or smile out of her every time. They would look over at the younger couple and their children from time to time, looking as though they didn’t have a care in the world.

All of them chose to leave at the same time, with the older of the two girls pointing out the man’s cane and saying (quite loudly to the dismay of her mother) that he carried it because he was old. While the mother did the “loud whisper” to inform the child it was not nice to say things like that, the couple glanced back with a smirk and moved toward their car, paying no attention to the life lesson being delivered on their behalf. The whole thing felt as though it was a real-time example of the Shakespearean monologue:

All the world’s a stage,
And all the men and women merely players:
They have their exits and their entrances;

Two people with cameras wandered into the space shortly after the “stage” had been cleared, pointed to where the older couple had been sitting, and snapped a couple of images. A few minutes later, I made my way over to the bench as I prepared to continue my wandering of metro Birmingham with the sunroof open. That’s when I saw what the older gentleman had been doing with his cane:

We worry about entrances and exits so much nowadays that we seem to forget to enjoy the moment. It’s important to point out wrongs so they may be made right, especially when it’s blatantly obvious. It’s also just as helpful (and necessary) to stop, draw in the gravel, and smile.

It makes it easier for the next person to stop.