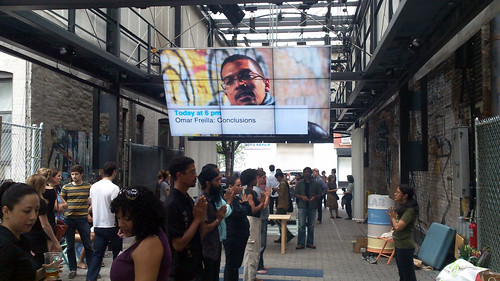 I can’t think of how best to describe what might happen this afternoon at The Edge of Chaos. That’s probably as good a reason as any to call it a “wicked discussion” especially considering the topic – journalism.

What started out as a conversation about what I’d been able to study and experience in Chicago in recent years with folks at UAB has turned into what will hopefully be the first of many discussions about Birmingham’s journalism ecosystem. It’s not necessarily going to focus on the future of journalism; there’s no need to when we’ve already done it. It’s probably going to have me thinking about my visit to The Guggenheim Lab last fall just before it left New York (hence my using a photo from that experience).

It’s occupied a lot of my time in recent months, especially as a “back to basics” approach begins to develop for The Terminal (one leading to much more going on behind the scenes than on its front page right now).

It’s been floating around in my head since the first year I attended the Block by Block Community News Summit in Chicago. The pre-conference gathering in 2010 focused on the results the second annual survey of that city’s online news ecosystem (financed by the Chicago Community Trust). The outsider could deduct the goal was to determine how best to utilize the existing information outlets to support their initiatives while attempting to figure out just how the community was connected and where support could be best leveraged (I’d argue it was quite helpful indeed).

While we do have an incredibly active community foundation here in Birmingham, such an exercise has not been undertaken as of yet (though it could be argued it could be a great potential next step). The desire to bring the community of online journalism together (for whatever purpose) led those of us interested in seeing where such a conversation could lead to take advantage of the newest thinking space in town to get it started.

Many of those who plan to attend want to make accessing information in Jones Valley easier. Some of us have been at it long enough that we’ve been called hacks, or crazy (or worse). The overwhelming desire is to serve our community the best way possible while recognizing the need to take a different approach to generating revenue. There’s also a need to be more deliberate in connecting the dots and recognizing that there are bloggers who are ready to take on the mantle of citizen journalist – in all of its forms – and that practicing the ethical tenets of journalism becomes more important than ever.

I’m personally interested in seeing how we slow down the news cycle just enough so we can present as clear a picture as possible. I’m finding it harder to believe that we can’t take advantage of the digital tools at our disposal instead of believing they must dictate our every step. We’ve probably turned more people off from finding out what they need to know because of telling them everything they want to know.

There’s no desire for trade secrets to be shared. It’d be nice for folks to know the conversation is taking place and we’re all accessible and willing to make sure it moves forward. Perhaps we’ll even learn to adopt a more inclusive phrase as we continue to talk – a community information ecosystem.