Hope springs forth in Avondale 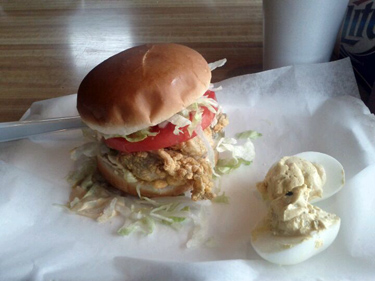 I probably could show you a photo of 41st Street South (a.k.a. Spring Street), but it probably wouldn’t tell you the whole story. This photo of a fried oyster sandwich from Saw’s BBQ does a much better job.

Yes, I said Saw’s, the same folks that took over Broadway BBQ a couple of years back who’ve become a staple of the Edgewood commercial district in Homewood. They just opened their second location in the former Quick & Split BBQ space at 215 41st Street South. It’s already got a Foursquare check-in page too. It’s one of several things that have changed recently along 41st Street. Thankfully for many who’ve spent time working on the project, it’s just the beginning of something long overdue.

Some would argue that the renovation of Avondale Park (nearing completion as Southside Baseball prepares to get into full swing) has been the turning point for the community. Others would be well within their rights to point to other things, including

Well, it wasn’t any of those things by themselves, but the head of steam those and other changes along the street as well as the dedication of its surrounding residents that got me to spend a little more money than I’d planned for lunch and watch the world come to Spring Street.

It’s nice to see things finally progress and see some of the players do their part to help continue moving it along, including next week’s announcement about who won Avondale Brewing Company’s Occupy Avondale contest.

It’ll be interesting to see what happens next.