Surrendering to the car 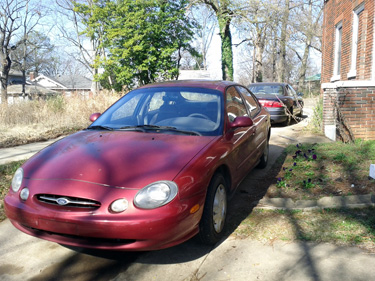 As I’m writing this post, I’m sitting in the room designated as my home office here in Birmingham. It actually is my home office – a tangled web of plugs, paper and a draft that’s uncontrollable because of where the room’s located. It’s one of the reasons I tend to work from coffee houses during the winter months.

Today though I’ll be working from the “office” since Betsy’s car won’t start.

Yes, if my car was running, I’d probably just hop into it and head down to one of the numerous automotive shops to get some help figuring out what’s wrong. The thing is, my car hasn’t run for more than a year.

Granted, I’ve been looking for a way to force myself to work from home more often in 2012 – perhaps a way to help stay a little more focused on the goals I’ve laid out for this year. I’ve just come to realize sitting here just how dependent living in Birmingham is on owning a car.

One of the major changes in how I lived my life when I first got to town was my increasing dependence on my car. The last year in Savannah, I averaged about 15 miles/week if I didn’t plan on heading out to the beach. If I did, I ended up doing closer to 70. I lucked out in working less than a mile from my house, allowing me to walk or (more often than not) bike to the office. I only drove at night and on weekends and even that depended on what I was doing. There are several, including Betsy, who can recall offering me rides home to keep me from biking at night. I’ll point out though that as great as it was while living there, much still needs to be done (and is being accomplished) for cyclists in the Hostess City.

A month after arriving here, I was averaging six miles a day by car just getting back and forth from the office. The districts I served drove that total up significantly, since it meant driving literally from one side of town to the other. There were some months where I turned in 500 mile+ mileage reports. Luckily we didn’t have to leave downtown for much while we lived there, save groceries. It also didn’t hurt when I could get most of the things I needed in my districts while I was out visiting them.

Where we currently live in Norwood (the neighborhood site’s apparently being rebuilt) is convenient to downtown though it still makes more sense to drive in compared to hopping on my bike. The hills and steep inclines aren’t really the problem, though they contribute to it. It’s more of a mental barrier in tackling the Interstate that runs nearby. There’s also the fact that many things needed aren’t just around the corner as they were in Savannah’s Victorian district.

You’d think attempting to build my life around being online would require less driving (with the onset of things like Skype and the Google+ hangout). The funny thing is, the more time I’ve spent online, the more important it became to see folks offline.

The fun in dealing with that reality (and others like making a grocery run) hits home hardest when you can’t really get out when you want to – an argument used often by those who wonder why people ask for alternatives to driving, like walkable communities and mass transit.

Having grown up in a city with components of all three functioning in a reasonably acceptable manner, why can’t we have it all?

For the time being from where I sit, I can’t. It’s OK, but at some point a lot more folks are going to start wondering why too…

Is using the car better than traveling on public transport?

nice stuff in writing skills. i liked your blog story

I am very glad with your blog. It’s really very interesting post full of valuable information very well written by u. The key part of this post is its descriptive way to define anything. I liked it with my heart. This post is a excellent example of such kind of thread.

I am very glad with your blog. It’s really very interesting post full of valuable information very well written by u. The key part of this post is its descriptive way to define anything. I liked it with my heart. This post is a excellent example of such kind of thread.