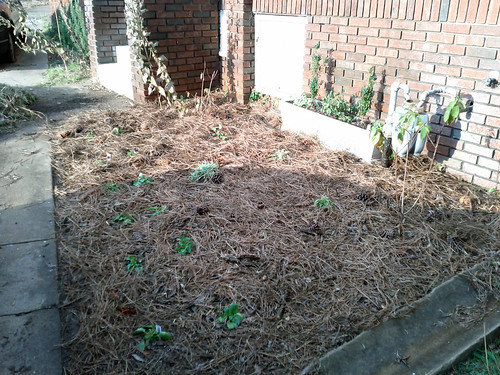 I spent five hours on Thursday planting brown-eyed Susans, purple pansies and flat parsley into the ground along the west-facing side of the house. I needed a break from staring at the screen.

Part of that time included using a hand tiller to tear up a patch of grass and weeds in that space – as well as digging up two silverleaf hydrangeas from up front to move to the side as well. They were planted last year shortly after the laptop was stolen from the house – and are now replaced with two oakleaf hydrangeas. They’ll probably do a better job of filling out the flower bed up front. There’s a pile of bricks sitting on the front porch waiting to be moved to the back yard  found while digging up that planting area last fall.

Some folks go for a run when they’re stressed. I know some people who enjoy heading out for a long drive somewhere unknown. I’ve been known to do both, but I find no better escape than digging in the dirt.

I lose entire days outside cutting the grass, raking leaves and moving plants from one part of the yard to another. Those who I’ve leased from who’ve had outdoor space don’t necessarily freak out. I find it mildly hypnotic – a nice way to get away without having to go anywhere. It’s cheap too.

I hadn’t been able to work in a yard since I first moved to Birmingham. I left a rather large pineapple sage plant behind in Savannah (as well as a chocolate mint plant that I only replaced last year). There were some marigolds growing along the entryway and the patio in front of the carriage house on East Bolton had outdoor lights strung from the door over to the storage shed our landlord rarely used (since he hated yard work).

It helps me forget about the old woman at the end of our block who likes to make crude and derogatory comments as Bets and I drive by her house. It keeps me from worrying about the latest issue I’ve got to deal with on the site. It actually helps me clear my head – today it also helped me sit back down and knock out an reasonable strategy proposal for a client.

It doesn’t have to be gardening – it can be finding a cozy corner and reading a book or logging those 5 or 6 miles I used to on top of gardening – but at some point it’s nice to disconnect. It means you’ve got a story to tell when you get back online. It also means that you can look people in the eye and see what they mean instead of trying to read meaning into an avatar and snark.

It’s a nice reminder that something is never truly finished; it’s only in a state of transition. The beauty of the process – and the various states of existence – isn’t too bad either.

I’ll keep you updated on how the gardening’s shaping up in the coming months.  Right now though, I’d love to know who else is unplugging by digging in the dirt (or in some other way).

It's good to know that you can do the gardening,That's very unusual.Thank you for posting

You really diggin' the dirt hahah!You're really great when it comes to gardening.And I want to learn how to do it so.