Focus on the heart (but pay attention to the extremities) 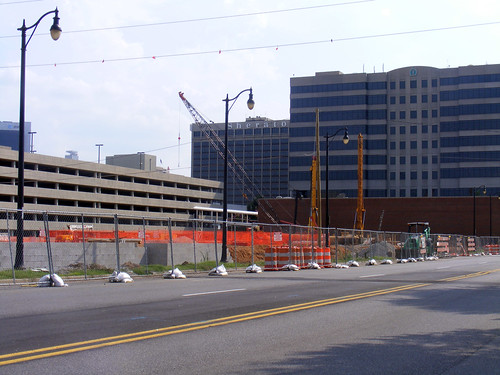 One of the lessons I learned while working for SDRA in Savannah was to not focus on just one area of a city at a time. It sounds a little crazier than it is in practice, but it’s true.

You do want to identify one section of the urban core as a focal point; you just don’t want to necessarily neglect the rest of the city (or that core) while doing so.

While the city fathers here in Birmingham neglected that unspoken rule for some time, they’ve come around recently. If we had air conditioning in the car I’m sure I’d see substantial progress not only on Southside (with Railroad Park and the future home of Children’s Hospital), but over on Ruffner Mountain with the one-year old treetop visitors center, Northside with construction underway for the long talked about entertainment district adjacent to the BJCC and on the city’s west side with the pending completion of a repurposed Fair Park complex, a.k.a. the Birmingham Metro CrossPlex.

The issue right now is that a lot of folks seem upset that there’s not just one thing going on in town – that there’s not focus on only one part of the city. There seems to be a push to focus on Railroad Park OR Lakeview OR The Marketplace OR [insert other area or project], but not all of them. That sentiment is not necessarily a smart one.

A favorite first memory of mine in the Southeast was visiting with my cousin in Atlanta back in 1992 while taking part in the Savannah College of Art and Design Rising Star program. My partner in crime during the experience, Eric Sabee – (yes, you want to check out his site and then come back), joined her up high atop the Hyatt Regency Atlanta. We were sipping on some Cokes and looking out the window getting a chance to see all of the projects underway as the city prepared to host the 1996 Summer Olympics. It was amazing to see cranes throughout the city making improvements – some still enjoyed by its citizens 15 years later. Others, admittedly, not so much…

Something of interest to me recently is how New York’s High Line and Birmingham’s Railroad Park developed. It’s safe to say that the projects took similar periods of time, and both have been enthusiastically received by their users. The general optimism associated with the projects though seem to differ.

I think it’s the reason I’ve been focused so much on patience recently.

I’ve always had an optimistic dreamer approach to driving around Birmingham. I’ve been asked to write about that sometimes frowned upon habit before, and it’s something I’ve had to work at getting back recently.

Now I think about tree-lined streets on Southside with new construction housing the next wave of urban pioneers in greater downtown. I also think about new homes and apartment buildings that borrow elements from those located in Highland Park repopulating vacant lots in Fountain Heights and Norwood. I remember how much my imagination raced as I drove 8th Ave North/Bush Boulevard/19th Street, Ensley out to the city’s western edge from the office in Woodlawn, thinking of what it would look like as it came back. I wonder what the streets of East Lake will look like with most of the homes occupied and people actually walking to the corner store (assuming that it walkers must already be in place before transit will be fixed, but that’s a post for Urban Conversations – maybe even tomorrow). UPDATE: Here it is – Walking for transit.

I’ve long hoped to be able to enjoy an event similar to Pedal Pittsburgh where metro area residents would be able to see why all of these things should be moving forward at once, instead of operating as tiny kingdoms – whether within the city limits or surrounding it. Perhaps the Ruben Studdard Marathon is a starting point; a race contained within the city limits that helps demonstrate there’s a reason you focus on the heart while not forgetting to pay attention to the extremities.

So while others continue to say construction of The Marketplace is a detriment, I’m thinking of how nice it would be if we’re still living here in 5-7 years to walk or bike out our door to 12th Ave. N. and have several options to choose from at night for eating besides visiting McDonald’s. I can always hop in the car and drive over to Lakeview and check out new places like Slice. That said, I don’t always want to hop in the car to go somewhere and I’m willing to bet others think the same thing.

As cool as the new place can be and the desire to focus all of the attention on it, maybe it’s OK every once in a while to act on the other impulse I’ve noticed in this city – figuring out what’s next.

Photo: The Marketplace under construction. acnatta/Flickr