Is The New York Times online fit to pay for? 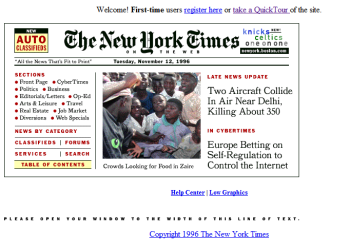 I’ve had a New York Times online account longer than I’ve had a home Internet connection. It survived longer than my CollegeClub account (most things have) and ten computers.

I’m more than ready to finally pay for it.

I remember signing up for the Times on the Web when it launched in late January 1996; I visited most days from SCAD-Savannah’s original computer lab, Corbin Hall. It was the same day that I signed up for Yankees.com (Bob Sheppard’s voice welcomed you every time – I miss that).

Having all the news that’s fit to print delivered electronically allowed me to keep a weekend tradition from home.

The Times’ Week in Review and Magazine captured most of my attention on Sunday afternoons beginning sometime around 7th grade. It was after I clipped coupons for Mom via the Daily News or New York Newsday (or read the comics).

It became required reading in junior year of high school as weekly English vocabulary quizzes in Mr. Zazzarino’s class were based on whether or not we’d learned it was OK to ask for help if needed (a lesson folks probably need to be reminded of frequently). We had to read those two sections from cover to cover and look up any word we didn’t know – and be ready for anything. We got bonus points for every word we got right in the Sunday crossword puzzle. Those were valuable quizzes and lessons on many levels.

The launch of the news organization’s digital subscriptions this afternoon was always expected by early adopters. They even told us back on January 22, 1996 that one day they would charge for access. It’s also providing me with yet another lesson.

Visitors to the digital version of “The Gray Lady” will be viewed as not just readers, but customers – something that is not necessarily the case right now. We may have consumed the stories written by that newsroom of more than 1,000 people online for more than 15 years, but we weren’t their customers. We provided eyeballs for them to entice their actual customers – the paper’s advertisers.

There have been a couple exceptions to that last statement; TimesSelect subscribers (an effort that didn’t exactly fail) and those who love doing the premium crossword puzzles.

Those who pay will allow the organization to present advertisers access a  specific group of people, leading to higher ad rates. I’d argue it’s a twisted case of the freemium model for online news – and one that might work.

Workarounds are out there and they’re great for those of us who understand how to remove a few lines of code. It’s probably safe to assume though that the average person accessing  the Times on their phone or their tablet will not want to mess with that at all.

Apps like Times Skimmer (which incidentally is the Times’ Google Chrome app) gives me an idea of just how easy it will be for those not necessarily always parked in front of a computer with a keyboard to pay for access.

Thanks to one of the site’s existing customers – Lincoln – I will be able to enjoy accessing nytimes.com to get my news until at least the end of January 2012. By the way, based on reported numbers the Times stands to make as much as $15-30 million over nine months because of its Lincoln sponsorship – before the metered pay wall even goes up. It’s about providing access and not about pushing physical papers or page views.

I’m selfishly hoping that paid access may also lead to a more curated experience, including community managers and additional benefits (maybe the occasional live stream of a TimesTalks event?). It may be too early to expect that much, but it could happen.

It’s not like folks don’t already pay for premium benefits on what is basically a free site now; think of Dropbox & Evernote as examples. Time will tell though…

What do you think about the new digital subscriptions?