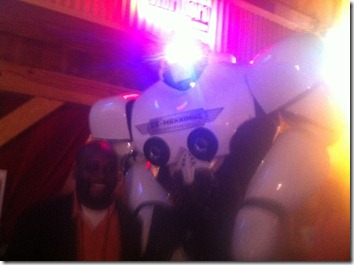 It’s not too often that I can say I’ve talked with a nine-foot tall robot. But the folks at Centresource in Nashville provided me with that opportunity this past Saturday morning. I didn’t win one of the three iPads they were giving away, but I did get a chance to talk to CS-Maxximus for a couple of minutes, giving me a much needed escape from reality. Special thanks to Amber Weinberg for taking the photo to your left.

I’d gotten in the car at 5:30 a.m. that morning wondering if I should still be going up to Nashville. It was for BarCamp Nashville after all – the first time I’d be in town, albeit briefly, since the floods earlier this year (BTW – they still need your support).

That, the fun of dealing with getting the house back in order after Thursday’s events and recent conversations with folks that I may have placed too much trust in had led me to be in a slightly more disturbed state than usual.

Several hot-air balloons were taking to the early morning skies as I approached Franklin, TN. Music blasting over the speakers inside the car, it brought about the first real smile I’d had in a couple of days. While in town I had a great chance to catch up with folks that I rarely get a chance to see or speak to in real life. I also met a few new folks I hope I’ll be able to talk with again soon. The free Yazoo Beer at the after party didn’t hurt either (nor did the continuing hospitality of the Cadillac Ranch)…

The best part about those conversations were that most of them had nothing to do with the world of blogging or digital communications. They weren’t asking me about web development (I still don’t think that I do but I realize I know more than most). We talked football, children, books – in short, life.

While I was up there, I saw a tweet about a presentation dealing with treating your blog like a business. I’ve got no problem with that approach – for those that got into this crazy online world because they wanted to make money and establish themselves as a valuable resource (both on and offline). I got into it for a slightly different reason – to tell stories and live life.

It led me to send out a tweet on Sunday that I think can guide me through the next twelve months if not longer:

I’ve had dealings with several people recently where words and/or actions were more focused on the bottom line than anything else. Andy’s tweet earlier this evening sums up the notion quite succinctly.

I’ve gotten so used to talking about what I try to do that it feels like I’m getting away from what I should be doing – having fun. It’s definitely not going to be easy to get back into the mindset that I had a few years ago, but I think that it’s a goal worth striving for – one day at a time.

Let’s hope my actions show what I’m trying to live in the coming days.