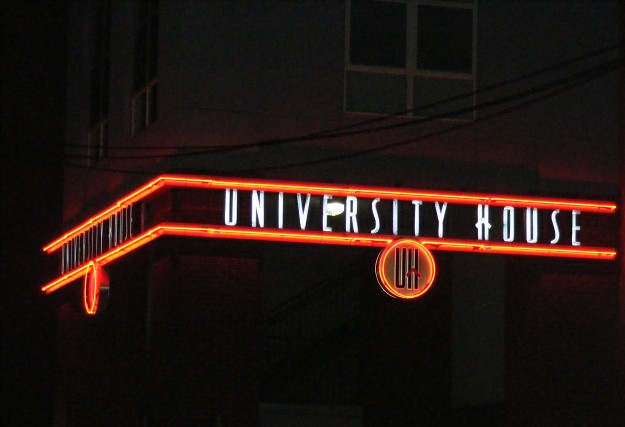 One of the great things about the potential future of Birmingham’s Southside is the opportunity for new neon signs to be added to the cityscape.

A couple of years ago a new residential structure gave us a taste of what to expect as developers begin to rebuild and re-imagine the area surrounding the soon-to-open Railroad Park.

University House was built specifically for those attending the University of Alabama at Birmingham (or UAB as those of us who live here refer to it) though I’m aware of students from Auburn studying at the Urban Studio living there as well. This sign shown above is located at the corner of 14th Street (where a streetscape/repaving project is nearing completion) and 4th Avenue South. It also just happens to be across the street from the new home of Good People Brewing Company and what they hope (after the upcoming legislation) will be the home of their own beer garden. Add to that continuing conversations about a new downtown home for the Birmingham Barons, and you’ve got the makings of what should be the beginning of Birmingham’s Golden Age.

That's a beautiful sign. I haven't driven down that way in a long time - I will do so this weekend just to see this!