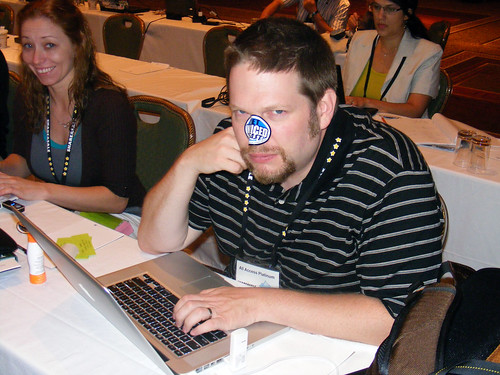 Chris Brogan‘s scheduled to be in Birmingham, AL next week to speak at the Green Building Focus conference.

There are many who read this site who will probably not be familiar with who Chris is and why this is significant.

He’s considered one of the top online communications consultants in the world, maintains one of the more popular blogs and he’s a co-author of a New York Times best seller – among other things.

Plus, as you can see in the photo, he’s a pretty laid back individual. It’s from the last time I got to talk to Chris in person.

We were in the blogger’s lounge at Affiliate Summit East last August at home in New York City (where he also served as a keynote speaker with Trust Agents (affiliate link) co-author Julien Smith) and let’s just say that the room was having a lot of fun – even as I attempted to pick his brain for advice.

It’s fairly safe to say that Chris is one of the most genuine voices out there right now.

As he said yesterday on his site, he knows certain things that he can share with our fair city. It’s safe to say that a goal of the conference organizers is to have Chris impart that knowledge on us while he’s shown by some of us here just what Birmingham, AL is in the 21st century and how it is contributing to the global discussion of sustainability.

New York was the second time I’d ever gotten a chance to talk to Chris in person. The first time was at  1 a.m. PT in the mall connected to the Planet Hollywood Resort and Casino in Las Vegas as the first full day of the first BlogWorld Expo (in 2007) was winding down. Incidentally, it was also the first time I met Jason Falls. I’d just signed up for Twitter before I flew out there that November and before we turned in for the “evening” – after a conversation that covered both blogging and what to do while in Vegas – we exchanged Twitter handles.

For those not familiar with Twitter and what this means, that exchange has translated to nearly three years of incredible information, wisecracks and advice. Every time I wonder if I should pretend my account doesn’t exist, some insight shared from one of those accounts (and countless others that I’ve been able to connect to) have reminded me that the exchange is worth it and that it’s a great first step in changing how we approach and improve the world around us.

It’s not going to be his normal audience, but it shouldn’t matter as the general themes should resonate with anyone interested in making a difference in the world through a word that’s become a little dirty in social media circles recently – influence.

That said, any opportunity to hear him live and possibly interact with him and others considered thought leaders is a great one.

I’ve got a feeling that Chris will help convey that sense of discovery and fun when he speaks on Wednesday. I’m hoping to catch him for a minute or two just to say hello (or maybe I’ll just drop a quick note via Twitter).

I’m also hoping that those of you able to attend will do so, perhaps gleaning one more piece of the puzzle in helping ourselves and our region expand its horizons.

We’re getting a chance to pick his brain after all…