Under the influence of women 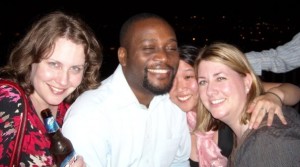 Today is the 99th observance of International Women’s Day and I’ve been taking a look job opportunities that have been posted recently wondering what it would be like if I was able to land one of those positions.

Yes, the two are related – at least to me.

Before folks start to freak out too much – It would be foolish for me not to take a good, hard look at unique opportunities as they become available, especially in this economy. Whether or not I look at something depends on what I think I can learn from the experience. Right now, it’s not necessarily aggressive but something I think I need to do. Now that I’ve got that out of the way…

One thing of interest to me is the fact that I’d most likely return to working for a woman depending on the position. This has led me to remember that some of the most important lessons I’ve learned over the years – regardless of the field I’ve worked in – have come from some of those women I’ve reported to or worked alongside. It’s also made me realize that those positions that I’ve interviewed for in recent years have always involved the possibility of reporting to a woman.

March is Womens History Month so perhaps it’s appropriate that I’ve been thinking about the influence that some women have had on my approach to life. It was especially apparent last night while following the Oscars on Twitter just how much influence they have on society, considering the strong individuals that deservedly won the awards for Best Actress, Best Supporting Actress and (for the first time ever) Best Director.

Whether it’s been learning how to develop a managing style from my days in hospitality (something I feel will always be a work in progress), picking the brain of my supervisors while working for SDRA and SCAD while in Savannah or realizing that taking the chance is much better than wondering if I should have or not, women have normally helped  guide those lessons, have had my ear and been able to influence me tremendously.

While there’s not necessarily someone I report to directly right now, there are still people who’s opinion I value. They’re also been people that I can rely on (most times) regardless of the situation.

Perhaps it’s the occasional direct messages from Beth Harte and Kellye Crane regardless of the topic that help out. It could be the numerous conversations that I get to take part in online every week like #soloPR Chat and Sarah Evans‘ #journchat that give me some hope and expose me to what’s going on out there. Maybe it’s starting my Sunday mornings off by listening to Nancy Hornsby preach during First Church Birmingham‘s Beginnings service…

While we should be recognizing this level of influence often, today’s a chance to possibly share just how women have influenced you.

Thanks for the comment! The year's going to be an interesting one, that's for sure. I'm hoping for some good opportunities as the year goes on - like maybe a Next American Vanguard slot for May - but we'll see... I truly appreciate your friendship and I'll talk to you soon :)

Thanks for the comment! The year's going to be an interesting one, that's for sure. I'm hoping for some good opportunities as the year goes on - like maybe a Next American Vanguard slot for May - but we'll see... I truly appreciate your friendship and I'll talk to you soon :)

Now that I've figured out that the new Disqus plugin allows you to comment in the normal backend that it may not show up where you want it (sheesh), I'll copy and paste what I wrote yesterday now:

Thanks to you for being a friend and for sharing the link with others. Hopefully we'll hear from some folks about who's influencing them...

Andre, you are a true gentleman and someone who I would rank at the top of my 'people I respect' list. You've always had an ear for me and I do the same for you...friendship at it's best (even though I KNOW I talk your ear off!!). ;-)

Whatever path your are lead down and whoever you report to or work along side, I know you will always offer value and wisdom as well as a slice of calm.

This post is an excellent example of why you're such a great community builder, Andre. We rarely take a moment to appreciate those around us. I'm so honored to be included in this post, and I'm glad to call you friend.