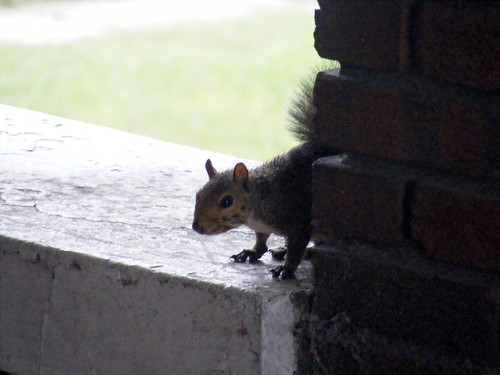 One of my most vivid memories of growing up is of where I grew up.

I’ve written about the University Heights neighborhood in the Bronx before (though it’s been a while ago, and a reminder that I still have to transfer the older photos over to the new blog – one of many hopes for an upcoming trip).

One of the more fun memories were of the squirrels. Growing up my brother and I had fish (well, let’s say that we attempted to have fish), but we also had the dozens of squirrels and the occasional chipmunk that called the oval home. We’d feed them peanuts if we had any (a habit that was encouraged by our grandmother) and they’d come up to us as we came home. Ironically, I didn’t see that many squirrels all of those years in Savannah and really hadn’t seen that many around here in the last five years – until I moved to Birmingham’s Norwood neighborhood…

The little guy pictured likes to come by and visit the front porch of the house every once in a while and just stare at myself or Boomer wondering what’s going on inside. It’s pretty cool actually and one of the more relaxing parts of my day.