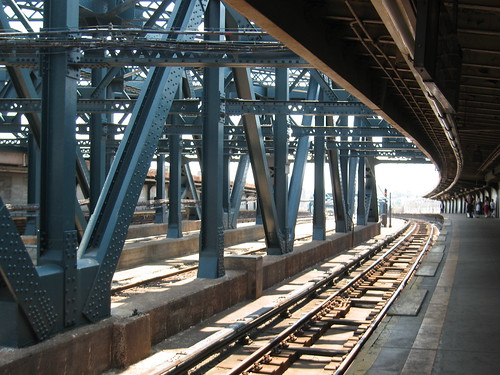 It’s one of the most comforting sounds you may hear, though you don’t realize its effects on your mindset until you’re away for some time. It’s one of those things that I look forward to with great anticipation upon my return to the Big Apple tomorrow evening.

After driving for close to 14 hours by some estimates and dropping my bags off at the apartment on Fordham Hill I’m going to run down to the elevated station on Fordham Road for the No. 4 train and wait. Wait for the music of New York.

Music seems to have this ability to transport people to anywhere they want to. It can bring together people from several different walks of life even if it is for different reasons. One of the most interesting things about music is where you look for it. Some people have to go to the large music festival and become part of the collective force, hanging on every note. Some can find it just as easily in the sounds made as a rail car passes over the tracks. In my case, that constant rhythmic sound is one that I miss about my hometown. It can easily lull me to sleep and remind that there are peaceful places in the world that do not require a backpack.

This journey only takes me down Jerome Avenue and then through the spine of Manhattan. Instruments change as the car moves through the city; the sounds of cars blaring their sound systems in the Bronx changes to the multilingual conversations that exist as the train moves from 59th Street to Grand Central Station. The rumble of the cars through tunnels allow for a different, more rugged approach to the songs. My song took me to lower Manhattan and led me to enjoy the music of the harbor as I hopped on the Staten Island Ferry. The breeze and the sounds of raindrops hitting the side of the boat were even more relaxing. The ability to escape to a place in your mind even with large crowds around you is a talent that few that need it possess. All you can hope is that they find access to it soon so that they do not get driven mad by the doldrums and pitfalls that seem to face us in these modern times as people allow stress and drama to rule their lives.

Sometimes you need to seek out some other forms of music as comfort. And music can definitely change as you venture away from home. I went to listen to a great jazz quartet called Mingusphere late this summer. This group had been playing at one of Birmingham’s great local art galleries, Bare Hands Gallery, throughout the hot months. Attendance for their shows grew, providing an oasis from our unbearably hot summer here in the Magic City.

The gallery provided a great, smoke-free environment to enjoy some great interpretations of classics from Charles Mingus and Thelonius Monk. For this show my friend and I ended up sitting in the loft area of the space, giving us a bird’s eye view of the band and most of their audience. The audience was letting themselves travel to other places as the music filled the space, carrying away problems and concerns as it floated through the air.

The show I attended was the last for a while, as the members prepared to resume their regular musical lives, at least until the next time their efforts are needed. Hopefully in their stead, people may try to listen to the sound of the trains that pass close by. Or however they see fit to escape the drama and craziness that occurs in our cities daily.