Do we care anymore?

An issue that has been on my mind in recent weeks is civic engagement. It is an extremely important factor regarding success in my job because without true participation from the public, success becomes difficult. I also feel that it is an important element in the health and vitality of a city.

The real issue I’ve been thinking about is what people truly mean when they use the term. Voter turnout in the recent Birmingham City Council elections was quite dismal. The sense of voter apathy made me wonder if those that have concerns about the city’s current state really take advantage of their opportunity to speak with their vote. It is one of the most powerful tools in existence for providing support or rejecting current conditions in any democratic society.

There are even some concerns with respect to what people view as proper civic involvement. I currently serve on boards for two civic organizations in Birmingham; by chance they happen to be one of the oldest organizations in the city (Birmingham Jaycees ) and one of the newest (Catalyst ).

The Jaycees focus on leadership training through community service. Each project is supervised by a member of the organization. Through the management of the activity or program, it is hoped that the members will learn leadership skills that will allow them to be both marketable and involved in the community. 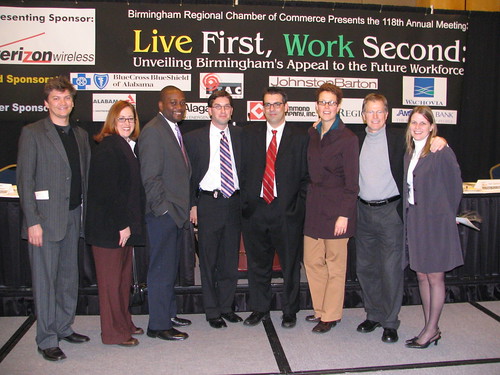 The Catalyst website lists an accurate description of the organization: a diverse group of civic minded individuals who collectively want to bring positive change to Birmingham. Catalyst carries out its mission through the hosting of events focused on specific topics. Events have been held at some of the more hip and happening places throughout our city center, making it “hip to be civic.” They may be onto something. The organization currently boasts more than 850 members. The recent Candidates Forum had more than 100 attendees and attendance by 9 of the 12 runoff candidates. Those that were not able to attend will soon be able to hear candidates’ statements online via podcast.

Is that the point though; to get big numbers? The Jaycees had membership numbers upward of 400 in the early 1980s; we are currently on pace to have around 30 members as we enter next year. The work that is done by the organization is extremely important and it does provide a vehicle for individuals to gain skills and connections.

One of my political heroes is Daniel Patrick Moynihan, the late senator from New York. He wrote:

The central truths that Mr. Moynihan mentions are alive and well, however the lines are blurring tremendously with respect to who it applies to. There are few that perfectly fit into either of those camps anymore. It also makes you wonder if those labels still have a place in this society. Both of the previously mentioned organizations are driven to make their city and their region better. The question should not be “which one is doing it better?” but rather “Which one fits me better?” Or how about “Why can’t I be a part of both?”

There are many organizations that exist throughout the region that strive to make it a better place. While this duplicity of hopes and dreams may seem repetitive and insane, it may be just what is needed. If everyone fit into one group, it would be really boring.

I hope that everyone can become engaged through whatever vehicle works for them, whether it’s discussing ways to solve major social issues and a plan of action over martinis at a local bar or helping a child round the bases at the Miracle League Field in Moody. We need to figure out what works and what won’t alienate them from taking part in their community in the first place.

Love to hear your thoughts…