My kind of town? I’m not sure yet. 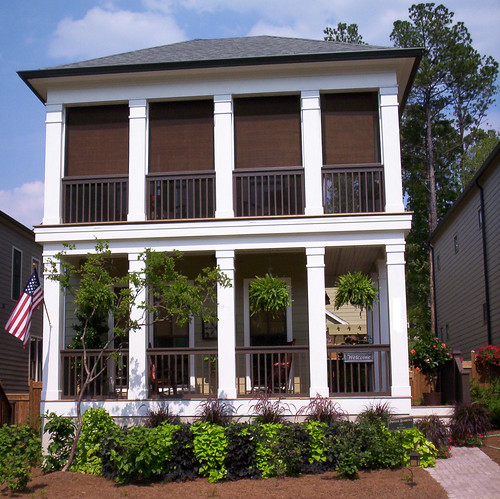 Saturday morning I participated in the 2nd annual Shake and Bake 5K out in Mt. Laurel. This is the second real race that I’ve run since starting rehab work on my right knee in hopes of avoiding the knife. The time was somewhat respectable considering I still have not really gotten back into serious training (36.58.9) and that I figured that finishing with no pain was more important than finishing and being carried off via someone else’s power.

Now, Mt. Laurel is one of the New Urbanist developments that have been sprouting up across much of the country over the past 25-30 years. Andres Duany, considered by many to be the father of New Urbanism, developed Mt. Laurel’s master plan a few years ago, with plans well underway to complete phase II of the development in the near future. The site is about a 20-minute drive from downtown Birmingham with no traffic on U.S. Hwy 280. Green and khaki signs point you towards this enclave that is nestled among farmland and other new subdivision projects in various states of progress. The signs can lead you through a more scenic, winding path or a straight shot to the state road that runs in front of the entrance.

Once inside its low sitting stone walls, it feels as if you’ve been transported to the set of the Truman Show, only it’s been made to resemble what the ideal community in Birmingham could have looked like long ago. The homes being built here are of the highest quality and can cost you anywhere from $200,000 to $400,000. Streets are tree lined and there’s even one of those ideal downtown areas with the local hardware store, soda fountain shop and excellent restaurant. There is a Montessori school, traditional elementary school and an Episcopal church. There are brick pavers covering most of the sidewalks and the site includes a nursery where plants are grown for the landscaping of the “town.” Recreational amenities are abundant in the form of playgrounds and a swimming pool. Planning wise, this is an ideal community coming to life.

Here’s what I don’t get: people move out here to this community, buy their new old house out in this ideal town layout, get into their cars and drive 30-50 minutes due to traffic congestion to their jobs in the big city, get in their cars again at the end of the day to come home while stopping at the big boxes for their needs and the grocery stores for pre-prepared meals and then pull into their garages and roll up the sidewalks in their ideal world to surf the Internet and take part in a virtual community while ignoring the beauty surrounding them. This effective takes away from the walkability factor that many of these communities are based upon.

During the race today, there were several residents out walking and showing support for the runners. I especially like the little boy that had decided to write “Go Daddy!” in red chalk on the sidewalk this morning while his mother watched on. I must say that these were the most residents that I have ever seen walking the streets of Mt. Laurel at any time of day. The other freaky moment came as I walked over after the race to check out the farmer’s market taking place in the town square section. I suddenly realized that there was a dog following me on my right side. I turned and looked down to see what it looked like and the owner was immediately apologetic for the dog just trying to come up and say hello. I saw her later as I went to the car to grab some Gatorade after the race and she made a point of saying that she was keeping her dog away. It kind of made me wonder just how community driven the neighborhood could be at times.

I am definitely not the first person to ever write about the success or failure of this “new” type of housing development. And I’m definitely not going to knock the virtual community that exists today because it allows for people who would have otherwise lost contact to keep in touch. It just struck me today while I was attempting to catch my breath while checking out the homes throughout the property that some people seek to find the perfection in the good old days and are paying a premium for it and then not taking advantage of it. Homes of similar size are available in beautiful sections of the city of Birmingham for much less than their Mt. Laurel counterparts, with the price still being cheaper after paying for renovation costs. The basis of these ideal downtowns still exists if only in building form throughout the region.

The need to design new developments in the traditional style is a noble cause indeed, but why can’t we reuse what we’ve already got first?