What’s in your city? 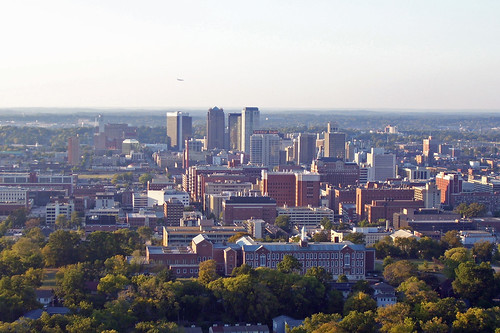 I was talking with my friend Curtis Palmer about one of the more recent posts on his blog, and it made me think about viewing the city in a different way. That’s pretty much the result of all conversations with Curtis; I leave wondering just how much stuff there is out there to learn. Anyway…

He talked about the fact that the longer that you live somewhere, the more “invisible” it becomes. The idea is that you become so accustomed to most of the scenery that you stop paying attention to the little details and sometimes can miss some special things taking place around you.

I want to challenge the readers of this post to add comments letting me know what stands out to you as the most important landmark in your area. I’m looking for all kinds of answers. It could be the most logical object or building that you see as you come into town or the one place that you will only find if the locals determine you worthy enough to learn of its existence. I have a few answers myself. I plan on spacing them out over several posts throughout the next month. Maybe it will force you to pay some more attention to those around you and notice life.

While not instantly apparent as you enter the city, the statue of Vulcan that overlooks downtown definitely stands out in my mind as an important piece of the skyline of the Magic City. Another friend of mine suggested going up to the observation deck and enjoying the view of the region. It’s become one of my thinking places that sometimes works and sometimes doesn’t for clearing my head. On clear days you have impressive views of the city center, the steel plants that are still active, the airport, and much of the surrounding metropolitan area. The entire park underwent an extensive renovation more than one year ago and the results are impressive. The statue was built for a World’s Fair and remains world’s the largest cast iron statue. The god of fire and craftsmanship was chosen to symbolize the city due to its production of steel. Birmingham is the only place in the world where all of the ingredients needed to produce steel are found naturally.

Bets and I ended up choosing our loft in part due to the view of Vulcan that we have out the window. Especially during the winter months, the view of the statue lit up for the better part of the evening is a pretty nice view. The few visitors that I have had come to town in the past year have been taken to Vulcan Park as it’s the only way to really enjoy a view of the city and get a taste of why Birmingham even came into existence.

So, the ball’s in your court. Let me know what your place is.