Where have you gone Joe D? Ryno wants to join you… 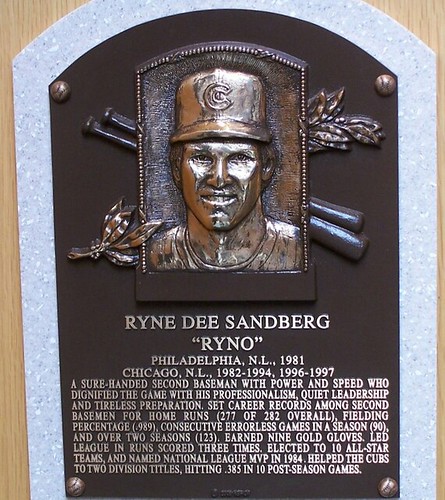 I consider Ryne Sandberg to be one of the greatest men ever to play the game of baseball. This belief has been proven true in my eyes by his actions time and time again: when he decided to simply walk away from the game that he enjoyed and from some of the most dedicated fans in baseball; when he turned down receiving one penny more of salary after retiring from the Cubs because he felt he hadn’t earned it; whenever he hit a home run and just ran the bases like he had a few hundred times before and not show boat and grandstand. There was, is, a class that very few men who play this child’s game possess displayed by “Ryno”.

I found that he did one more thing this past Sunday as he was given one of baseball’s highest honors to solidify his place as one of the classier men to ever be allowed to play in Wrigley Field; in that classic, throwback style that he has, Sandberg used his “last big game…last at-bat…” to remind people that respect and teamwork should and does still matter in this day and age.

Baseball has always been considered by its most fanatical followers as a reflection of the good and bad that exists in our American society. For years, there was an “innocence” about the game that people now long for. The game was not perfect then; Jackie Robinson endured a tremendous struggle to break the color line; Latin players faced their own injustices as they entered the adult play world of America’s pastime. The game did epitomize what the American dream was supposed to be about; working your way up through uncertain obstacles to achieve a place on one of the largest stages in the world. You shared that stage with your teammates. You almost never heard of everyday players showing up the manager. Or not running out a squiggler to the mound in hopes that someone will bobble it. There was always respect shown for fellow players and the organization. In a modern world where the top rated shows are more about standing out and emphasizing the individual than the group, baseball reflects a society in need of hogging the spotlight. Ball players probably have to learn as many specialized hand shakes for after their Ruthian home runs as they do signals for running in the base paths. Americans are more concerned about the name and age of the car in the driveway than about the quality of education in our schools or the real level of our values at this day and age.

Many players in all sports are concerned about not wanting to be role models in this SportsCenter-highlight, lightning fast information age. They’re more concerned about how they look on television that day. They can’t drop down the bunt and give up two points on their batting average just to provide a better chance to win as Sandberg and players of his caliber could and did do. Play nowadays becomes selfish rather than selfless. The respect for the game has been replaced by the need to show someone up and have the last word.

It has become uncommon to have something happen similar to the events surrounding former Sandberg teammate Greg Maddux’s 3,000th strikeout. Maddux struck out a potential future Hall of Famer, current Giants shortstop Omar Vizquel, looking. The ballpark went crazy as flashbulbs went off to capture the moment. Maddux did not pump his fist. He didn’t glare down the batter. He simply walked off the mound and headed the dugout as he always did. He’d done it before, he planned to do it again soon and he’d done his job.

Let me know what you think.