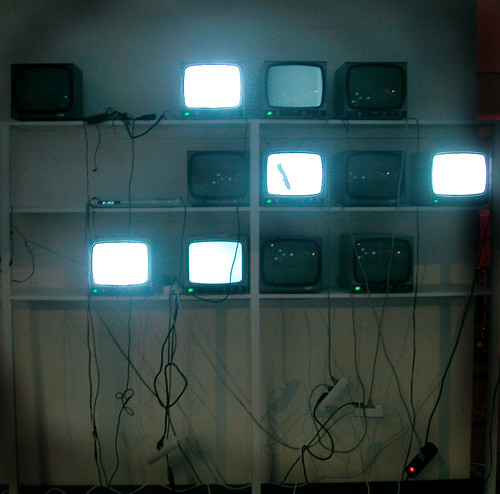 It looks like Springsteen’s 1992 song has come true – at least if you don’t have cable and you’re hoping to see a significant portion of the London Olympics in real-time.

Megan Garber brings up a great point in her piece for The Atlantic on July 30 – for the most part, we’ve always lived with tape-delay recaps of the Games, unknowingly naive of when we weren’t seeing something (like the 7/7 terrorists attack tribute the guys at Deadspin have made available on their site). Friday’s opening ceremonies was an exercise in what happens when the water cooler discussion goes digital and someone always seems to have a workaround. It’s not like Friday’s tape-delayed broadcast wasn’t the most watched Opening Ceremonies in history because of the buzz surrounding it. Oh, wait a sec…

Between Twitter and unofficial BBC live streams, you had a pretty good idea about what was going on in London’s East End. Unfortunately, there seemed to be a bigger focus on raw numbers instead of the common themes bubbling up around the digital water cooler.

If you’ve got any level of digital sophistication, you’ also had (and continue to have) other options. You’re probably following the official Olympic hashtag page on Twitter in addition to seeing how things are going via live blogs (like those being maintained by The New York Times, the CBC in Canada and the BBC). The folks smart enough to have figured out the workaround for the opening ceremony have no doubt had their device of choice “develop a British accent” in recent days, enabling them to watch the BBC feed as needed even as the official site for the Games provides up to the minute coverage.

Considering what’s currently available in the United States thanks to federal regulations, I’m still surprised we didn’t see NBC leverage the digital subchannel options during these seventeen days. It’d be a perfect demonstration of what this technology could mean long term. Worst case scenario (based on how this technology is supposed to work), they had an opportunity to ask local affiliates to suspend broadcasting MeTV (among other things), replacing it with the NBC Sports Network or Olympic specific channels, enabling at least a significant portion of the country to watch events, perhaps even in real-time. They could still do a prime-time wrap up while allowing those able to watch to see events as they happen.

Yes, it’s still limited to those with access to digital channels and subchannels, but it’s a much better (and relatively cheaper) solution than throwing all of the additional coverage online and on cable. The opportunity exists to reach more people who’ve chosen to cut the cord (though they’re probably having second thoughts) in addition to those that have never been connected in the first place.

This whole thing could be moot though since we’re really talking about convenience for the viewer. As vocal as criticism has been about the tape-delay situation (and despite efforts to silence that criticism), we’re still only hearing from those who feel the need to complain. There are plenty of folks willing to hear extended commentary and to have the someone tell them what’s supposed to be important. It’s a case of understanding exactly how to be patient.

One more thing – those who want to see the commentary trimmed back a little during the opening and closing ceremonies may want to see if the IOC would be willing to share a link to the PDF of a modified official program with the public. It doesn’t even have to be as detailed as the official media guide, but  it could help.

Photo: nothing on tv. Nadya Peek/Flickr.