Taking the stage as a Wise Man 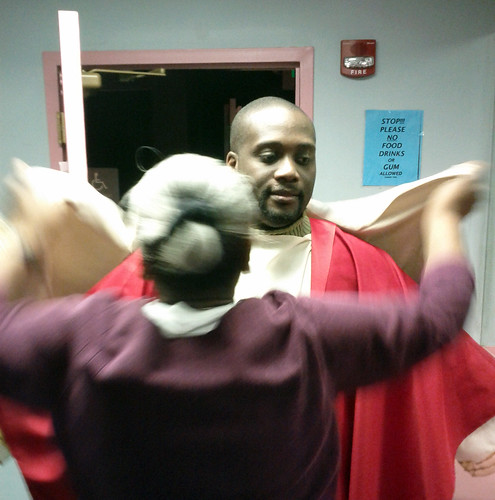 There I was, standing in the dressing room in the back of the historic Carver Theatre last week in downtown Birmingham. I was getting fitted for my costume – the one I’ll be wearing tomorrow (Thursday) evening.

That’s when I’ll be one of the Three Wise Men in the Aldridge Repertory Theatre production of Langston Hughes‘ Black Nativity. The show opens this evening at 7 p.m. and there are still tickets available for the five performances (for $10 each).

Finding out I had the chance to do this was sort of a pick me up a few weeks ago. See, the way the play was written, the Wise Men don’t have singing roles and many productions have turned to prominent members of the local Black community to fill those roles. Kidding about the opportunity on Facebook led to some very interesting responses to say the least. I guess it’s one way to start getting back out in the community in time for 2012. For some, it’s also a way to say thank you to your community’s sages.

It’s a fairly eclectic list of folks you may see processing from the East to see the baby Jesus. It could be Anthony Underwood, Deon Gordon, or John Paul Taylor.

Reading Hughes in high school and college and growing up in New York, I’ve always wanted to see the the play performed. For the last two years I’ve been waiting to hear about progress on a film version of the work (which is supposedly still in development according to this interview).

The play is performed across the country, including a 41 year-run in Boston, a production in the Lower Ninth Ward and one entering its fifth year in Charlotte.

There are many holiday traditions out there. One of mine includes staring at a Yule log on a screen (but that’s another post).

Every once in a while you need to find a new one or stretch your boundaries just a little more. This year I thought it was one of those times where the boundary pushing should win out. We’ll see – and I’m sure I may see some of you there as it happens.

Photo: Getting fitted at the Carver. acnatta/Flickr.