Let the blood rush to your head 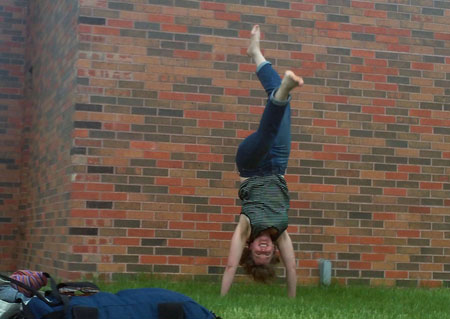 “Sometimes it helps to let the blood rush to your head.”

I wouldn’t do the rest of that conversation justice, but that line continues to stick with me, especially as I’m attempting to figure out what to do next.

I’d just taken the opportunity to snap the photo of Amanda Hickman that you see off to your left. We’d already been enjoying the privilege of waiting on the front lawn of Columbia Regional Airport for the security checkpoint to open for a while; it would be another hour.

We were taking full advantage of the WiFi connection available outside and some joy in knowing that we could all one day start a story out with “that one time when we were sitting on the front lawn waiting for our plane in Missouri…” I personally think Vadim probably did enough work to make up for all of us eventually deciding that unplugging and staring up at the sky was the better part of valor.

While I’d had the chance to talk with Amanda for a little while at the opening reception a couple of nights earlier, this group conversation was much shorter and more valuable considering the place I was (and currently still am) mentally. Someone asked her if she did it often; she simply responded that it helped her think better while tackling big projects and issues. Considering folks are always asking for her opinions on issues, I decided it may actually be time to hear those words as a cryptic form of advice.

I’m trying to get up a little earlier every morning, altering the ritual just enough to get some blood rushing to my head. It’s helped to focus on problems when I’m more concerned about maintaining a steady breath while running or remembering why I didn’t like burpees in gym class. Those moments of silence I mentioned recently still exist in this new approach to getting stuff done. It’s now a reminder that I don’t need to be connected at all times, despite what folks around me think (or based on how they act).

I’m not quite sure if she intended the answer to be taken as advice, but it’s been pretty helpful.

I’m hoping a few of you choose to “let the blood rush to your heads” too. If so, how?

Mostly, I play capoeira. That's actually where the headstands come in.

@acnatta @AmandaBee / i go to the park and put Adelle (sp?) on my iPod and force myself to run as fast as i can for 45 minutes.