Strength from holding on (tight) 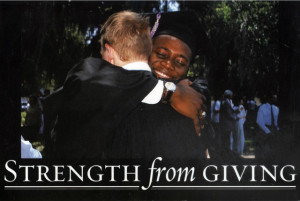 This is one of the cheesiest photos you will ever see of me (unless that one of me in the pink Easter Bunny outfit from that last spring working the Savannah Jaycees fair ever surfaces…).

It’s also one of the only candid photos I’ve ever seen from my graduation day ceremony in 2000. One reason for that could be the fact that no one – including myself – knew I would be walking until just before the start of graduation practice the Friday afternoon. The ceremony was held Saturday morning.

By the way, that’s Casey Edwards‘ head you’re seeing – those not part of the SCAD universe will probably want to check out his website. If I’ve only got one photo from that day, I’m kind of geeked that he’s the one in it.

The photo was used for one of the annual campaigns for which my alma mater is well known (this is the art school that holds a series of online submission competitions for scholarships after all). It’s probably also a poignant representation of something I’ve hinted at a few times before on this site – getting strength from others.

It’s not anything new and a lot of people have written about it in the past. It was already in my head before reading Sam Davidson’s post about not being where he thought he’d be when he was 18. This is a case of me not necessarily being where I thought I’d be when I was 25. It’s been 10 years since we were supposed to step out onto the world and make sure they knew who we were. I’ve been noisy, but I wonder if being too paranoid about making sure I had folks to lean on or respect me has kept me from really reaching for that brass ring.

I consider myself pretty lucky, accomplishing a lot of life goals before turning 30. I’ve run a 10K, biked 50 miles and managed a hotel. Seeing my byline for the first time in 2000 was a nice feeling too (almost as much fun as beginning to see it again starting in 2009). Enjoying the view that first night in the loft in downtown Birmingham was fulfilling (though I never did get that basketball hoop installed). Recently a Facebook invite from an ex-girlfriend re-introduced me to photos from one of my treks to Atlanta for the 1996 Olympics – as I was looking at the ones I had in my hand wondering if I should post them while thinking of the drive into the city alongside the Hummer limo carrying Aykroyd, Belushi & Goodman to the opening of the House of Blues (now The Tabernacle) during the opening ceremony.

Nostalgia is nice because it can remind you of what things were like and what’s possible. It also reminds you of who you held on to to get through the rough times and how you grew from the experiences.

If you’re lucky, the core cast of characters don’t change. Sometimes we’re not so lucky. Sometimes folks do begin to feel disconnected, especially when others are in search of their own form of passion and excitement. You hope the search for support isn’t dismissed as being needy or that calls for help aren’t seen as pointless.

The result is attempting to cling to memories for strength when you’d rather seek out new opportunities to be daring (and new people to help you along that quest). Social networks have made clinging to cliques and silos that much easier, though it’s as easy to walk away from it from time to time as it is to forget about the sunscreen.

It’s OK to hold on when necessary. It’s also OK to let go. It’s not OK to let yourself wander aimlessly because others suggest taking a leap of faith is foolish and ill-advised. Sometimes that leap is needed. What’s also needed is the assurance that that rock will be there for you afterward.

That tends to be a lot tougher for folks to allow to happen than they realize most times.

I’d love to hear your thoughts on who you lean on and why it is or isn’t so important for your well being. I know it’s important and necessary for me.

Great post. I like how you shed light on the people who are part of the journey. That's critical.

Having jumped more than once and more recently kicked someone else on to other things, I find that in all of it my faith in God has been my primary support... my best friends, too... Those folks (not necessarily family) that will 'love you no matter what' and I am grateful to have many! They have talked me down and through some pretty dark places and I know I can always count on them, and they on me...