Today’s Reverb10 prompt was the toughest one yet for me to get started on:

Wonder. How did you cultivate a sense of wonder in your life this year? 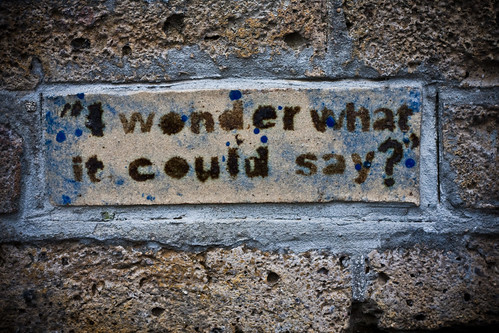 I’d say that I tried a lot harder than I realized I had at the start of the day. I spent most of the day struggling with what to write – then I realized just how many things I’d done somewhat unconsciously to do just that.

The first thing to do was to come up with what the word means to me. Here’s what I came up with:

Wonder means finding new ways to reach outside of your normal sphere and finding new people and things to connect with so you can push your own boundaries. It also means making sure it doesn’t become worrying.

Looking at it that way, there were a few things that helped me be more open.

Twitter chats – I became more active in #journchat and #wjchat, helping connect me to an ever-expanding circle of media professionals to talk to and get advice from. I also rebooted #bhamchat, with the hope that the conversations about issues affecting Birmingham, AL could lead to new connections and more discussions about positive approaches to solutions instead of negatively tinged banter. It’s been a great influence so far and makes me think a lot more about what can happen instead of why something can’t happen.

Attending conferences – While my trips out-of-town were significantly less than in recent years, the ones I had a chance to attend were quite influential. I’ve talked about CityCamp and Block by Block in previous posts; I also attended the first ever WordCamp Atlanta and helped organize the third edition of Birmingham’s conference for WordPress users. Those were great opportunities to figure out just how I wanted to tackle 2011 – one where I want to be known more as a writer than as a tech person or a marketer. It’s also a great place to meet folks that can be a positive influence on your approach to life.

Removing negative influences – I definitely resemble what Zig Ziglar has described a SNIOP – someone who is Sensitive to the Negative Influence of Others. I knew that it was getting worse as the year went along and decided that I needed to start pulling my way out of it – with a little help. Even after you remove the negative influences, it still helps to find new positive ones. I’ve found a few but I’m still looking for more as I feel as though I can accomplish anything I set my mind to nowadays – and this one move helped tremendously.

Writing – At first glance, I wasn’t quite sure if this should be on the list or not. Then I realized just how much time I spent surfing to find information about topics that I wrote about this year for B-metro Magazine and The Terminal. The mere act of writing for me makes me have to step outside of myself much more than I’d been able to before. I’m looking forward to taking advantage of those opportunities (and a few others) in 2011.

Not doing a damn thing – Well, not really… Sometimes it’s safe to slowly back away from the laptop. No, really. Or maybe disconnecting from the social web to enjoy a night out with friends or some drinks on the front porch. I’ve done all of those things this year and have felt great as a result. It also helped me deal with some of the more negative wondering that was going on in my mind and focus on enjoying the present moment – with a chance to wonder just how much is possible.

I’m looking to add a few more ways to cultivate this year. Any suggestions?

Looking forward to reading a few…

Photo: I Wonder What It Could Say? garryknight/Flickr