#reverb10: Dealing with the enemies of my writing

Today’s the second day of Reverb10. I got a late start on the project last night so I’ll give you a chance to catch up on yesterday’s post – choosing one word to describe 2010 and why.

Today’s prompt is courtesy of Leo Babauta, the creator of several sites, including Zen Habits, and author of the new book Focus .

What do you do each day that doesn’t contribute to your writing — and can you eliminate it?

I’m thinking that reducing both physical and mental clutter are key. 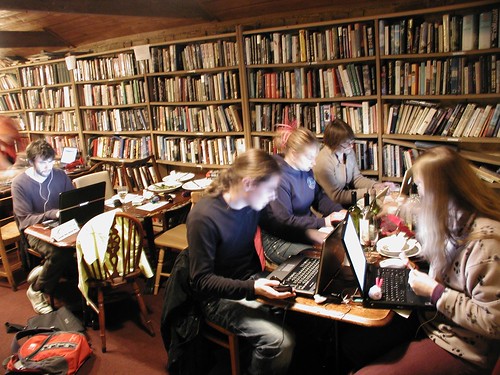 I know that I have opinions on several issues that will undoubtedly encourage some that don’t agree with me to comment. The funny thing is that was one of the reasons I started blogging – the online conversations that could develop and the people you’d get a chance to connect with (maybe even meeting them offline at some point).

Hopefully next year I can overcome the occasional fear of writing what I actually think.

Physically, it’s currently a comfort level issue. I used to go to coffee shops to escape work so that I’d have people around and not feel as isolated in a loft. Recently I leave the house because I’m still slightly uncomfortable sitting in the home office – and the house – by myself. Boomer and Ed can only provide so much conversation before they become more of an annoyance. Carving out time and a deeper level of comfort in a relatively quiet place so I can get into a groove for a couple of hours every day will be a major part of hopefully producing more online and print pieces next year.

Perhaps finding another shared office environment would help as well, though there’s something helpful about being able to listen to Joshua Redman betweens posts without having to resort to earbuds. Maybe I’ll find a way to pull off the bus project even if I’m unable to secure that initial grant. Time will tell…

I’ve even started breaking out the tie collection that’s been mostly collecting dust in the closet since I left the daily corporate world of economic development almost four years ago. I ran into someone yesterday who saw me wearing a tie and a suit who was wondering why I was wearing one and “…looking like I was actually doing work” while sitting an an area coffee house. Full disclosure, I was dressed to attend a funeral later in the day. It was weird though how seriously people took what I was doing when I was wearing the coat and tie versus a sweater and jeans. That said, I feel more comfortable in the jeans (though I feel more productive in the tie).

What suggestions to you have to deal with removing the clutter from the writing process?