The Ramble: Clearing a new path 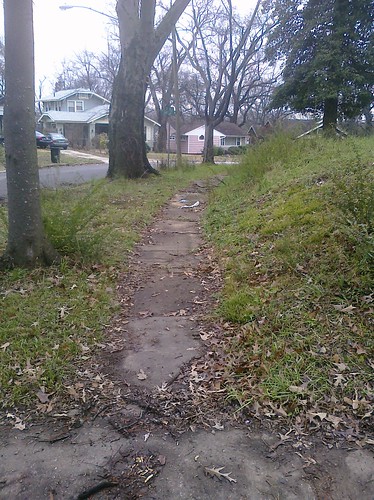 Yes, I saw the sign that sat in the tree lawn in front of the vacant lot located next to the house Betsy and I rent in Norwood saying that the city would hold a hearing about whether or not they would cut down the weeds over there just in time for Thanksgiving. At least, I saw it until someone decided to run off with the sign (which was just a little annoying).

There are never enough hours in a day to do everything that you want to do, or so we say. Every once in a while though  it just makes sense to shut everything else out and focus on one thing. In my case one Saturday in November, it meant starting to deal with that lot.

It also meant making some time to cut the grass in front of my house for what I hope will be the last time this year, raking the pine straw and leaves in the front yard and enjoying the excuse to work outside.

It’s tough to write pieces asking people taking responsibility for what’s going on around them and not take up the issue (or in this case, the rake) myself. There are still some things that need to be dealt with, but at least folks can consider walking on the sidewalk now (it was covered in mud and leaves before). While it’s only my small corner of the universe, it’s one that I can say I’ve helped shape and make better now, with some other benefits:

I’ve encountered some people recently for whom the idea of taking the issue before them into their own hands instead of waiting to hopefully pass it on to someone else to deal with is not even an option. Maybe it’s just not cool to show that you care or to go against the grain (though I’m hoping that Sam Davidson has shown that isn’t necessarily the case anymore).

Should it matter if it’s cool or what others think about it?

Shouldn’t it just be the right thing to do?

What are you willing to do for your community?

Those questions have been swimming around in my mind for the better part of three years and I’m figuring out that it’s time to tackle the issues head on and to stop waiting for someone to fix them for me or anyone else.

I could continue to stay quiet about my hopes for the future or I can start to put those plans into play and see what happens – taking Sam’s two-week challenge a little more literally than many would. I’m thinking that it may be time to work on finally becoming that overnight success, though it means clearing a new path that many (including myself) seem to be scared of doing…

What are you hoping to clear for yourself as the New Year approaches?

Are you willing to bear down now so you can hit the ground running?

I’m looking forward to seeing how folks respond to these questions.